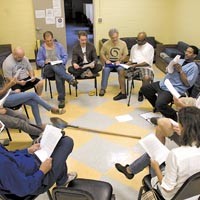 Racism, homelessness and addiction are tough topics usually the stomping grounds of social policy experts, but the Conciliation Project bravely takes them on.

This racially mixed collective of Virginia Commonwealth University students, led by Tawnya Pettiford-Wates, is building a new play in collaboration with the Healing Place and the Daily Planet. With a mission to “promote open and honest dialogue about racism in America,” the Conciliation Project has expanded its repertoire through the years to include related topics of social consequence. “Social change is not brought about by making a law or having a figurehead,” Pettiford-Wates says. “It can only happen by changing individuals' attitudes and beliefs. It is the only way racism can be eliminated.”

The Conciliation Project started in Seattle in 2001. The idea moved to Richmond five years ago with Dr. T. (as Pettiford-Wates is referred to by her students) when she came to teach performance in the university's Theater Department. The first show the project created was the play “uncle tom deconstructed,” staged at the Firehouse Theatre in February. It explored the often damaging legacy of Uncle Tom troupes, traveling minstrel shows that popped up shortly after the release of Harriet Beecher Stowe's famous novel, “Uncle Tom's Cabin.” The troupes were made up of white performers who blackened their faces and depicted characters made famous by Stowe's story. The play used a mixed-race cast masked in black face to address the historical nature of these classic stereotypes and then engaged the audience in a discussion following the performance.

During her years of working with students and witnessing their discussions about racism, Pettiford-Wates began to understand the relationship that other social issues have with racial issues. Two years ago the project collaborated with the Daily Planet, the Richmond-based homeless advocacy organization, to produce “Spades,” a play about homelessness. It was designed to bust myths about homeless people and was performed in shelters across the city, culminating with a moving performance at the Firehouse. This summer the collaboration has been expanded to include the Healing Place, an addiction recovery center for men of little or no means. “I am fascinated by communities that are healing themselves,” Pettiford-Wates says. “The Healing Place was founded by addicts, is run by addicts and serves substance-addicted people. When I went there I witnessed a community to help people right their wrongs from the inside out.”

The relationship of racism to addiction is multileveled, which solidifies the collaboration. “We are coming to understand more and more about how much addiction plays into the issues of chronic homelessness,” says Marc Taylor, mental health clinician for the Daily Planet. “The Conciliation Project's primary focus is racism, which intersects at every single level. The most obvious one is poverty and access to care. The other is how we engage the issues and the human experience that we want to keep out of our view. How do we engage those issues so that they are healed? ... Homelessness and racism go hand in hand. So that race becomes the face of addiction.”

The main objective of the project's newest, as yet untitled, play is to celebrate the act of recovery. In order to delineate a true representation of the work at hand, several graduates and recent graduates of the Healing Place program are participating in the process of writing the script. “We want to bring attention to the successes of that community and that model of recovery,” project member Joseph Carlson says. One man who recently completed the program at the Healing Place, identified as Mike, says he's participating in the script-writing process because “if something comes out of my story to help one person, that's incredible.”

The project ties in, artistically and emotionally, with the Daily Planet's 40th anniversary theme of “Simple Acts, Heroic Results.”  Just as Superman changed from mild-mannered Clark Kent by entering a phone booth, the residents of the Healing Place are being transformed from the bonds of substance addiction into functioning members of society. By developing a play, the team members also transform the pain of their addiction into a positive message of recovery.

The Conciliation Project play will be performed as the centerpiece of the 40th anniversary gala for the Daily Planet at the Empire Theatre on Saturday, Oct. 24.  Tickets are $40 and may be purchased by contacting Maureen Neal at the Daily Planet, 783-2505, ext. 242.