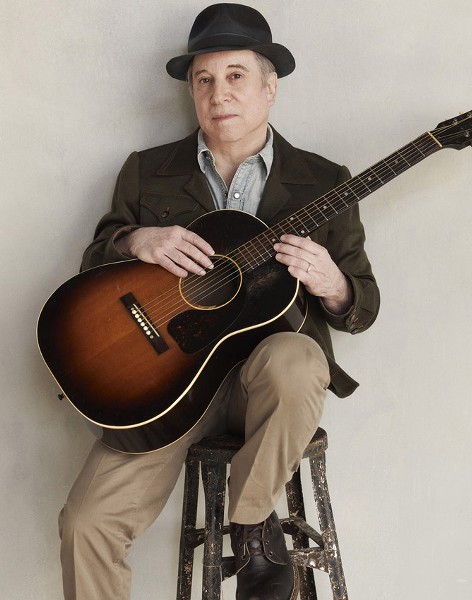 Mark Seliger Paul Simon was in top form at the Landmark on Tuesday night.

In an October piece for Slate, Style Weekly music critic Stephen Deusner made a convincing case in defense of Paul Simon: That the pop icon has been overlooked for his creative output when compared to peers like Neil Young and Bob Dylan, partly because he’s always been somewhat square, more of an adult student of song.

Simon may have had his greatest achievements as a member of ’60s duo Simon and Garfunkel -- “Sound of Silence” still sounds as hauntingly beautiful as ever—but his solo career has been a continuing exploration of American roots and global sounds, from Africa to Brazil, New Orleans to Memphis. To his credit, he seems to have followed his musical muse instead of attempting to recreate the past. Apart from a failed Broadway play, it all seems to have worked out for him.

As someone who has seen both Young and Dylan in recent years, Simon’s two-hour plus show at the Landmark Theater on Nov. 29 made the case for his greatness even stronger.

Tonight’s performance was easily one of the best concerts from an aging legend I have seen in recent years. Backed by a fluid, interchangeable eight-piece band (two drummers, two horn and accordion players, two guitarists, his longtime bassist Bakithi Kumalo, and a keyboardist), the 70-year-old Simon still sounded like a mercurial young idealist, vigorous in his playing and mellifluous singing.

Simon's brilliantly paced show at the Landmark featured an uncanny selection of his songs, both past and present. Nearly all of them have aged well and seem richer with meaning, while somehow lighter through the band’s masterful execution. Simon is riding high after a busy year that saw the release of a critically acclaimed new album, “So Beautiful or So What,” as well as several reissues of Simon and Garfunkel classics, and a two-disc career retrospective of his work titled simply “Songwriter.” Perhaps most poignantly, he performed a solo acoustic version of “Sounds of Silence” as a commemorative tribute for the 10-year-anniversary of 9-11—a moving feat he repeated on this night for his first encore, adding assertive Spanish flamenco guitar flourishes that only made the career-defining song more devastating.

As Stephen Deusner pointed out in his piece, Simon has always seemed preoccupied with mortality and embracing age. Now that he actually is an elderly statesman, his songs have caught up with him -- yet they’re more jubilant and buoyant. He’s managed to meld his many musical curiosities into one fluid, pleasant sound that is making this tour one of his all-time greatest.

It was clear from the beginning that the nearly sold-out crowd was going to have a hard time staying put in their seats.

Dressed in typical Upper West Side fashion, with a gray blazer, maroon T-shirt and jeans, Simon started the show with “Boy In The Bubble” and his first crowd highlight began a couple songs later with “50 Ways to Leave Your Lover”—featuring a bright horn romp worthy of Muscle Shoals. His veteran backup band performed admirably throughout, providing subtle and tasteful accompaniment that always deferred to Simon’s softly lilting vocals and at times, poetic lyrics.

Simon now performs all of his songs with strict focus on the rhythm. There are not many solos, everyone is working in concert to supplement and color the percussion. Even the guitarists sound like they are adding limber rhythmic melodies that function as beats, especially Cameroonian guitarist Vincent Nguini. From a washboard on one song, to a harmonium on another, every space is filled with rhythm.

Two nights earlier, Simon performed a hometown show in Newark, N. J., during which reggae legend Jimmy Cliff joined him for versions of “Vietnam,” “Mother and Child Reunion” and “Harder They Come.” Tonight, Simon sounded reinvigorated when performing “Mother and Child” with his own band, as a backing screen showed a huge image of the original 45 record in Jamaican colors.

The briskly moving selection of songs seemed to swim expertly through a vast expanse of American music – including a cover of Junior Parker's (and Elvis Presley's) “Mystery Train,” a Gershwin-like piano interlude and a rocking cover of Bo Diddley’s “Pretty Girls” that found Simon blowing mean harp. Wisely, he did not forego the crowd favorite every few songs: There were nods to the past: Simon and Garfunkel’s “The Only Living Boy in New York” and rollicking crowd pleaser “Kodachrome,” mellow ’70s favorites such as “Slip Slidin’ Away,” during which Simon hit some really high notes, and “Late in The Evening,” and ’80s hits “Diamonds on the Soles of Her Shoes” and “Graceland.”

Surprisingly, the new songs fit well, sounding rejuvenated in a live context, particularly the eloquent “Dazzling Blue” and “Rewrite” a goofily upbeat song featuring a screenwriter (“I've been working on a rewrite/ Gonna change the ending / Gonna throw away the title / Gonna toss it in the trash”) and a carwash attendant. The foot stomping “Obvious Child,” from the “Rhythm of the Saints” album, invigorated the house -- Simon’s band sounded at its very best when handling any sort of Cajun groove and bassist Kumalo was a sturdy anchor.

As a long time concertgoer, it’s a true joy to see a veteran who knows how to pace an extended set so that it never gets boring. Whenever Simon played a mellow song, you could be sure it would soon be followed by a different-sounding barnburner -- while the backing screen changed various colors to match the fluctuating mood. When it came time for the two encores, the concert kicked into another gear completely, as it should. The crowd released an audible gasp at the twinkling opening notes of George Harrison’s classic “Here Comes the Sun” and by the bittersweet closing, “Still Crazy After All These Years,” fans seemed spent from smiling and singing along beneath their breath. Simon didn’t talk much to the audience, but he didn’t need to -- he had too many lively songs to get through.

When it could take it no longer, the ecstatic crowd began streaming down the aisles like a boisterous wedding party animated with cheesy ’80s dance moves. Nobody seemed to mind.