Disney's early days inspire "Something Intangible" at the Firehouse. 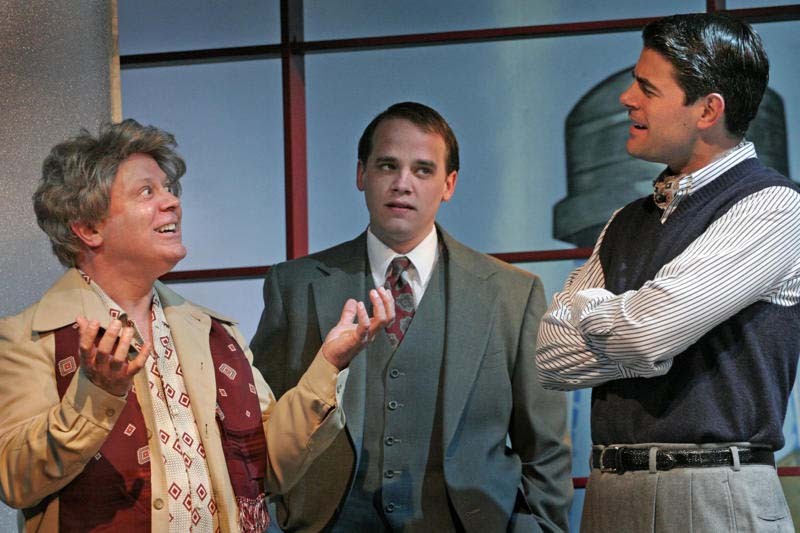 In 1940, Walt Disney released his masterpiece "Fantasia," a bold departure from his previous animated features and a box office dud that left the Disney studios in a precarious financial condition. Playwright Bruce Graham uses the story of the movie's development as the basis for "Something Intangible," the Firehouse Theatre Project's latest production.

With its sharp dialogue and brisk pacing, Graham's play works fine as an exploration of the tension between art and commerce, as personified by the battling brothers Tony and Dale Wiston (played by Adrian Rieder and Billy Christopher Maupin, respectively). But director Bill Patton goes even deeper with this engaging production, effectively exposing the complex tangle of envy, codependency and genius that spurs the brothers' constant conflict.

The plot focuses on Dale, the fiscally frugal fussbudget struggling to control his increasingly manic brother. Through his sessions with psychologist Sonia (Lauren Leinhaas-Cook) we learn about the brothers' start in a hardscrabble coal town, Tony's escape at the age of 12 and eventual rise to fame thanks to the Petey Pup cartoon character he developed. Tony's desire to move past the kid stuff and make a truly artistic film — and his enlistment of help from a pompous Austrian orchestra conductor, von Meyerhoff (Frank Creasy) — threatens to bankrupt the business while causing an irreparable rift between the brothers.

Maupin's sterling performance provides a sturdy foundation for the proceedings; he makes palpable both the protective love and petty jealousy that underlies Dale's relationship with Tony. But if Maupin grounds the production, Rieder gives it wings, his Tony characterized by a nearly nonstop outpouring of creative impulses. Leinhaas-Cook makes the most of a too-familiar character — the confidant and therapist — while Jay Welch has little to work with as an artist who becomes Tony's emotional punching bag.

Patton moves the actors with precision around a set split into Sonia's conservative, wood-paneled therapy room on one side and, on the other, Tony's office, which is dominated by a view of the California countryside. (The set was designed by Style Weekly's senior contributing editor, Edwin Slipek.) The period costumes by Rebecca Cairns are attractive and nicely understated and Geno Brantley's lighting design provides some dramatic flourishes that help illustrate the passion behind Tony's creative process.

The play is not perfect. While the numerous Disney parallels are entertaining — Tony dreams of building a Disneyland surrogate called Wistonville, for instance — they also make the story less universal. Creasy's portrayal of von Meyerhoff, though funny, was a bit broad for my taste. He's more effective in his dual role as Bartelli, the pragmatic dentist turned financier. But even with these flaws, there's something appealing about "Something Intangible." S

"Something Intangible" is playing at the Firehouse Theatre Project, 1609 W. Broad St., through April 16. Call 355-2001 or go to firehousetheatre.org for tickets and information.