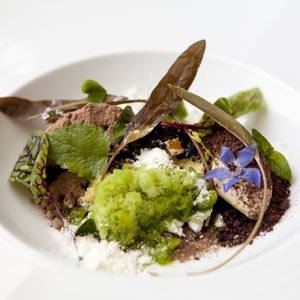 A nearly five-hour drive to dinner is a lot of time to work up preconceived notions. Can the fantasy of a high-concept superstar restaurant in the midst of an impossibly small town be as true as the buzz? Can lightning strike twice in a pair of Virginia's villages?

Comparisons between the relative newcomer, Town House in far southwest Chilhowie in Smyth County and the extravagantly froufrou Inn at Little Washington are inevitable among people who drop small fortunes onto their tongues. John B. Shields at Town House is one of Food & Wine magazine's top new chefs, and the food world's excitement about his achievements recalls the same hosannas that rained, deservedly, over Inn chef Patrick O'Connell three decades ago. Fine dining changes because of kitchens like these. And guests perhaps change as well.

Chilhowie, the town — its Indian name believed to mean valley of the deer — wears none of the calculated charm and fresh-painted clapboard that surrounds Little Washington. Highways here lead straight to a salvage yard and golden arches, then a gas station that advertises Slim Jims and Mellow Yellow as the snack du jour. Main Street is a stretch of crumbling, anonymous buildings, setting up an against-all-odds dynamic that thrills adventurers whose fix comes on forks.

Town House isn't really a looker, although drooling window boxes and crisp letters on the signs show there's serious business here, forget the neighbors. Let the staff do its job — to conquer utter skepticism. Three hundred bones may be the tuition, but the lecture is on the plate. Shields is a mad genius, his food a magnificent, meticulous ceremony. Everything that is said about his work is true. But is it enough?

Our visit begins with relief. The welcome is immediate, the room comfortably unfussy, the music modern without being assertive. The sommelier, impeccably suited and clearly from somewhere more citified, flourishes a bottle of sparkling and two flutes. Just as quickly, a square slate arrives with two savory cookies made of chocolate slathered in olive oil jam, Meyer lemon rind and a soft piquancy that disappears like the bubbles. The amuse bouche does its work, and taste buds are in a state of giddy arousal.

Dinner at Town House comes mostly in four- or 10-course fixed-price versions, although the errant diner can order “a salad spontaneously created” for $9 and a few entrees on a seasonal list. Because tasting 10 courses of anything seems beyond our ability to discern or afford ($110), this will be a meal in four acts ($58), each a tour de force. Shields plays god with the food, casting wee wildflowers and magical, powdery tidbits on the plate, each element distinct and ripe, so scintillating as to render ordinary conversation pointless.

Even the menu descriptions are poetic:  abalone and the seaweed it feeds upon; the end of summer's foliage. A dreamy example, the corn and crispy pork tail in Cruze Dairy buttermilk with basil-infused toffee, popcorn and cocoa nib, plays with textures but keeps its kaleidoscopic flavors at the fore.

It's as if each dish is a gift within a gift — sweet peekytoe crab in brown butter with lime hides beneath charred onions, which reveal banana and curry notes and a mellow base of lobster mushrooms and shrimp. Parsnip is made into candy, ham into cream, coconut into a whiff that floats away. This trippy stuff must make the neighbors wonder what on earth propels Shields and his pastry-chef wife Karen Urie Shields into a parallel universe that's part lab, part circus. There's barely any butter or starch, and only a steaming potato ciabatta to tether the familiar. But there is not a misstep or sour note, only exquisite results.

A lustrous pinot noir, the Ken Wright Cellars 2004 Guadalupe, is an apt foil from an enlightened and rangy wine list. Service is polite and professional, helping keep the gaze on a procession of brilliant platters, one of which looks like a terrarium, another a satyr's romp in the meadow. Something about the transience of each tender dish recalls those sand paintings by Buddhist monks that are intentionally destroyed. This is performance art as temporal as the day's pickings.

The room fills with date-night couples from other places, the mostly young food aware in finery that would look even better if the lighting were kicked down by a third. Candles shouldn't compete with chandeliers, especially ones that would probably make Patrick O'Connell shudder. But then Town House is no Inn at Little Washington, nor does it try to be. Opulence seems almost a throwback. To the modern diner, as long as the banquette is comfortable and the napkin made of cloth, it's intriguing, and coolly absurd, if a revelatory dinner springs from the unlikeliest of settings.