With an eye on a changing population, local churches broaden their approach to holiday tradition. 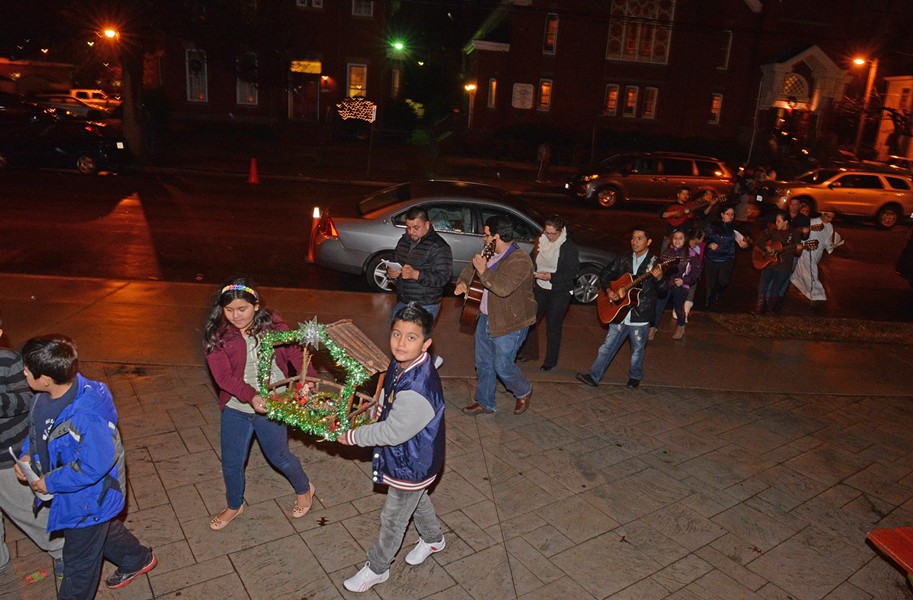 Scott Elmquist A candlelight procession at Sacred Heart Catholic Church is part of a nine-day posada, recreating the Bethlehem pilgrimage in song.

But local churches and outreach centers are embracing such unconventional programs in an effort to attract the unreligious and folks with different cultural backgrounds.

According to a 2013 Pew survey on religion, Latinos are at the heart of a growing trend. One in four Latinos refers to themself as a former Catholic. Asked to identify with a denomination, many of them claim none, although they consider themselves to be spiritual.

“I think you’re seeing a shedding of Catholicism, for example, in favor of folk roots,” Varesi says.

The Rev. Shay Auerbach of Sacred Heart Catholic Church wonders if his parishioners are familiar with esoteric practices. “Rural immigrants, they’ve probably encountered yoga only in the movies,” he says. “When our church organizes posadas every year, it’s like a retreat, we’re tapping into a feeling of community celebration.”

Posadas, which last for nine days starting Dec. 16, recreate the Bethlehem pilgrimage in song. The candlelight procession eventually moves indoors to break open a piñata. Seven groups will perform across Richmond, Auerbach says. And to some parishioners, this is a lifeline.

“As a child, I was really into posadas,” says Alfredo Arreola, a business administration student and member of Sacred Heart. “It’s comforting to find that in Richmond.” Arreola’s family still lives in Mexico.

While tradition may address a deep need, there are other avenues of outreach churches are exploring. Richmond has no Spanish-accessible mental health services, for example.

As program manager at the Sacred Heart Center, a nonprofit entity separate from the church, Mary Wickham works to offer such wide-ranging services as zumba and career counseling. “When you’re doing outreach,” she says, “you help someone by giving them up-to-date life skills.”

Varesi, who spent 15 years in Washington as a multicultural liaison, agrees. She says that at Lucid Yogi, the longing for connection is fulfilled through self-inquiry.

“I may teach yoga, yet ultimately I consider myself a coach,” she says. “One-on-one, it’s about helping people define themselves, and during some group events there’s a storytelling circle.”

Cutting out language altogether is the strategy behind certain services at St. Stephen’s Episcopal Church. Director of Communications Sarah Bartenstein expects a diverse crowd for Celtic Christmas: Contemplative Communion, which will be held Christmas Eve. The service reaches back into antiquity, to the origin of modern Christmas rituals.

“It’s modeled after our regular Celtic and compline services, which focus on ancient music and quiet contemplation,” Bartenstein says. Compline is especially monastic. Silence in the candlelight setting is broken only by Gregorian chants. “You’ll find people from other denominations,” she says, “or those who don’t identify with one.”

The popularity of alternative offerings has led the church to try its hand at yoga too. It’s about unplugging from an information-saturated world, not hybrid religion, Bartenstein emphasizes. The church website clarifies that “St. Stephen’s is not a ‘spiritual spa’ where individuals come for self-indulgent pampering.”

“True, churches don’t usually focus on physical fitness,” says JoAnn Bibb DeForge. “This church, though, is very conducive to wellness.” Since the fall, she’s taught two styles of yoga and a meditation class called Into Stillness at St. Stephen’s. A class on food guru Michael Pollan will be offered this winter.

It may take a celebrity to dispel doubts about progressive lifestyles mixed with religion. Barbara Brown Taylor paid a visit to St. Stephen’s in October after being listed as one of Time magazine’s 100 most influential people. Her motto was to “embrace darkness” and get comfy with ambiguity. S