An evocative script and exceptional performances highlight Barksdale's “Children of a Lesser God.” 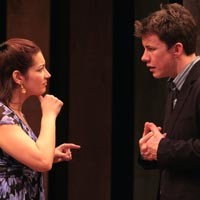 The Barksdale's previous show featured a single actor portraying all of the characters from “It's a Wonderful Life,” a prodigious act of theatrical heavy lifting. As if trying to top that effort, the company offers “Children of a Lesser God” at its Willow Lawn location, featuring a similarly Herculean acting task.

The show recounts the memories of speech therapist James Leeds while he worked with -- and fell in love with -- a particularly stubborn student at a school for deaf and hearing-impaired children. In his portrayal of Leeds, Landon Nagel must deliver the bulk of the show's dialogue in both spoken English and American Sign Language and then interpret the rapid-fire sign language of the maddening and enchanting Sarah (Erica Siegel) who refuses to learn to read lips or speak. That Nagel manages to slip in a deft and affecting performance amongst all of the mechanics is a testament to his significant talent.

While Nagel is the workhorse of the piece, it is Siegel who infuses it with emotion -- and she is luminous in the role. Fine supporting players add depth and texture, particularly the fiery Richard Gregory as deaf-rights rabble rouser Orin and the no-nonsense Linda Poser as Sarah's mother, who embraces an unexpected second chance to renew her relationship with Sarah. In bringing Mark Medoff's evocative script to life, director Bruce Miller employs a typically top-notch design crew with the lighting designer, Lynne Hartman, doing spectacular work illuminating Katie Fry's simple Arts-and-Crafts-style set.

The power of “Lesser God” lies in placing the audience so distinctly in the same shoes as Leeds: Like the frustrated teacher, we yearn for Sarah to speak. By the play's end, that yearning is effectively thwarted when we discover the wrenching inequities Sarah feels. Opportunities to experience this kind of moving, enlightening theater are rare. Don't miss it.

“Children of a Lesser God” is playing at the Barksdale Theatre at Willow Lawn through March 22. Tickets are $20-$38. Call 282-2620 or visit www.barksdalerichmond.com.