Signs and Wonders: A lifetime of trust goes into interpreting the music onstage through sign language 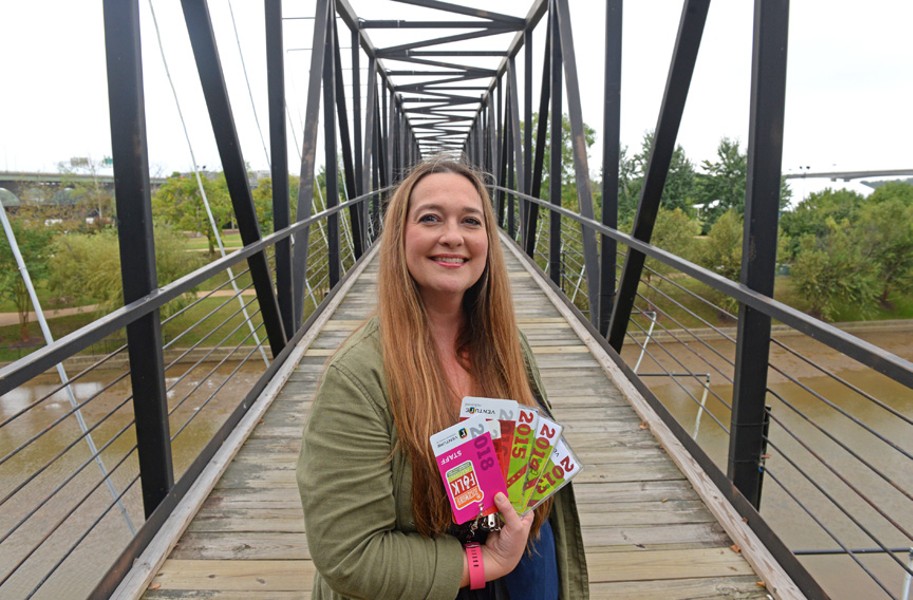 Scott Elmquist Melody Nikol Winters displays Folk Fest lanyards from years of her work as an interpreter for the musical artists onstage.

When you go to the Folk Festival this year, remember it's not just foreign cultures you're experiencing — it's another culture right here at home.

If you've ever marveled at the creative sign language used to convey the musical performances to Deaf people in attendance, then you'll be even more impressed by the work that an interpreter such as Melody Nikol Winters has put into it.

Originally from Michigan, Winters got involved with Theater for the Deaf at Western Michigan University. Her interest stemmed from a childhood experience with American Sign Language when her brother was believed to be deaf, although he later underwent successful corrective surgery. So she decided to study sign language in college.

But when she went to graduate she was told by school officials that it "wasn't a real language" and didn't count. That was the wrong answer.

As she explains, many people are not aware that ASL does not follow English sentence structure and has developed independently as a language.

"It has its own unique syntax, grammar and sentence structure. Like any other language, there are signs that have no words in English," she says. "So I worked really hard to get them to change their policy and allow me to graduate and have ASL be my foreign language. Now there are quite a few colleges that accept it as a real language."

Regarding her work at the Folk Fest, she makes a valiant effort to describe its mechanics for hearing people: "Deaf people have something called ABC stories where you use different hand shapes and sign language to play off each other," she says. "And different letters of the alphabet to make signs in nontraditional ways and put them together into a story. It's very clever how some signs flow and the hand shapes slide from one to the next – but it's very difficult to explain in English."

"My Deaf friends told me I had a Deaf heart," she says, adding that their community not only has its own language but "its own culture and humor." She politely declines any further attempt to describe this culture, noting it's a minority group that has been oppressed and discriminated against.

"They've trusted me, taken the time to invest in me, bring me up in their language and community," she says. "To really get it, it takes the support of Deaf people. I don't know what I would have in my life it weren't for them. I owe everything I have to their grace, trust and love and allowing me in. But it's not for me to define Deaf culture."

After Sept. 11 happened, she moved to Richmond and began working full-time as a nationally certified sign interpreter, working Broadway shows put on by Altria, as well as the Richmond Folk Festival for the past seven years. She also works through an agency in Washington and recently interpreted an Elton John concert at Capital One Arena during his final tour.

For bigger concerts, she researches set lists from previous shows to get an idea of the songs she'll be translating. "I analyze the songs, look for meaning, and prepare a product that is representational of the songs and the artist and matches the language. A lot of artists have common themes in their music."

As far as unique challenges at the Folk Festival, she says occasionally she doesn't know what songs the performers are going to play.

"It's a little bit fly-by-the-seat-of-your-pants up there," she says, recalling when a gospel group dropped out at the last minute due to a family emergency and was replaced by the Harris Brothers. It all worked out though: Members told her they would simply shout out Hank Williams tunes, some of which she knew.

Another memorable moment came a couple years ago with Kevin Locke, a Lakota hoop dancer and flutist. After learning he had an interpreter, Locke changed his own set to incorporate the sign language of Plains Indians who were among the first to use sign language in this country, Winters says.

"He taught me live, onstage, the signs in the song along with the audience and we all signed in the traditional way of the Lakota together," she recalls. "It was one of the most magical moments of my career, let alone the festival."

Winters keeps coming back because she loves and respects the Folk Festival for bringing cultural awareness to Richmond — especially the one closest to her heart.

"They get that this is a cultural group, to be included in a cultural festival, where we're all looking at things different from ourselves."

Melody Nikol Winters will be interpreting during the Oct. 13 Altria stage performance by Mavis Staples from 5:15 to 6:15 p.m., as well as for the "The Beat Goes On: Percussion Traditions" (Oct. 13 at CoStar stage from 1 to 2 p.m.). On Sunday, Oct. 14, with Zuni Olla Maidens at CoStar from noon to 12:30 and with Zhou Family Band at the Community Foundation Stage from 2 to 2:45 p.m.