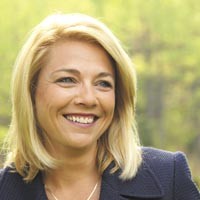 Last Thursday was a bit weird for WRIC-TV news anchor Lisa Schaffner. As local chairwoman of the American Cancer Society's Making Strides Against Breast Cancer walk in October, she spent the morning of Aug. 14 pumping up the crowd at the event's kick-off breakfast. Afterward, she was feeling a little uncomfortable.

Although no one at the breakfast knew, when the walk takes place in October, she won't be the Lisa Schaffner they chose for the job.

After 22 years at WRIC — becoming the city's first female newscaster to anchor a 6 o'clock news broadcast in March 1991 — Schaffner is leaving broadcast journalism.

WRIC General Manager Bob Peterson says he was blindsided when Schaffner recently broke the news. “I was shocked by Lisa's decision,” he says. “I appreciate everything Lisa has done for the years she has been here. I wish she was staying.” Peterson says Schaffner's replacement has already been chosen, but won't yet say who it is.

Schaffner says the tipping point was her children. Danielle, 14, starts attending James River High School in September, and Jesse, 11, heads to Robious Middle School. “I've never been home to put them to bed on a weekday,” Shaffner says.

Beginning Oct. 1, Schaffner will be director of public relations and marketing for the United Network for Organ Sharing, known as UNOS, a national nonprofit based in the Virginia BioTechnology Research Park downtown. As it turns out, the position was created for Schaffner when rumblings of her retirement began to circulate during the last few months.

“We created it for her because we saw the opportunity,” says its executive director, Walter Graham. “She has the ability to bring focus and attention to UNOS and its mission, particularly in the Richmond area, and to help us expand into new areas.”

For Schaffner, parting is sweet sorrow. “I love my job. I've done so much for myself,” she says, fighting back tears. “It's the right decision for my children. Sometimes you have to push yourself to do things you normally wouldn't do, but you're doing it for all the right reasons. I have two very important reasons.”

At 46, an age she says she's “not ashamed of,” Schaffner has spent nearly all of her career at Channel 8. When she arrived in 1986, she had only a few years of experience as a general assignment reporter for WBAY-TV in Green Bay, Wis. A visit with her brother in Leesburg impressed her. Then nature intervened.

“The next winter was the snowiest Green Bay ever had,” she recalls. “I thought it might be time to leave.” Coincidentally, there was a job opening at what was then WXEX-TV, based in Petersburg. In the 22 years since, she's hung on as WXEX turned into WRIC and moved its base of operations to Richmond. She emerged as the face of the operation in 1991, during a tumultuous time for the station. She succeeded former anchor Kevin McGraw, who was fired because of low ratings and the station's perennial spot as the No. 3 station, behind WWBT-12 and WTVR-6.

At the time, McGraw was allegedly having an affair with reporter Gretchen Carlson, a former Miss America, who got her start in Richmond. Carlson moved on to become co-anchor of the Saturday Early Show on CBS, and now co-anchors the nationally televised morning show, Fox & Friends.Aÿ

Schaffner's watched the station's rankings shuffle back and forth with the competition, and survived it all. In one notorious incident, she was allegedly shoved onto a desk while trying to break up a shouting match between former co-anchor Steve Coleman and news directors in December 1992.Aÿ

Schaffner became a stabilizing force at the station, and has watched the broadcast industry go through a multitude of changes. Today, local television news competes with a plethora of cable news shows and the Internet.

“When I came on board, we had a noon, a six o'clock, and an 11 o'clock broadcast. Now we have an additional two hours in the morning, an additional 4:30 broadcast and all the Internet coverage. We did live coverage, but now it's live 24/7,” Schaffner says. “The lifespan of the story changes. When viewers see a story at 6, they think, ‘What are you going to give me at 11?’ We're constantly trying to pull in that new information. It takes more resources and more time.”

Meanwhile, WRIC has largely taken a backseat to WWBT and anchors Sabrina Squire and Gene Cox in the echelon of local television news. While WTVR has seen anchors come and go, Schaffner has remained the face of WRIC for nearly two decades.

“She is a scrappy competitor who outlasted a lot of her competition,” says the newly retired Douglas Durden, former television critic for the Richmond Times-Dispatch. “Her perky hair and delivery have been a welcome constant through decades of change. Unlike a lot of people who were brought in to be anchors, Richmond audiences watched her evolve from reporter to anchor.”
Meanwhile, Schaffner's lived many stages of adulthood in Richmond. “I've been married here, had two children here, and divorced here,” she says. And although cooking dinner was rarely on her to-do list, she did learn how to make some mean chocolate-chip cookies, which she's looking forward to doing more often.

Her last day on the anchor desk is Sept. 15. Two weeks later, she'll show up at UNOS, where there is no clothing allowance. Female newscasters often receive a stipend for clothing as the equivalent of celebrity models for local fashion. “Anything you saw on the air and liked, you'll see me in again at UNOS,” she says.

Coming to terms with the change in persona weighs heavily. “People always ask if I'm nervous when I get on TV. I'm never nervous,” she says, adding the caveat: “About this, I'm nervous. It's a big life change.