History and unkempt markers point to the trials and tribulations of the way-finding committee. 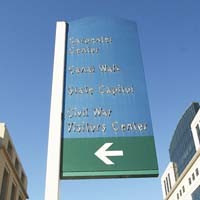 The blue and green sign with white letters near the intersection of North 20th and East Main streets in Shockoe Bottom directs visitors around the corner to the “Edgar Allen Poe Museum” — and misspells the poet's middle name. Two other green and blue signs along East Main point tourists ahead toward the Annabel Lee — the riverboat tour that ceased cruising in 2003. Traveling west on downtown's Broad Street, there are two small brown-and-white signs announcing the presence of “Museums” but failing to identify which museums, and where they are.

Navigating the city's historic and cultural landmarks using its hodge-podge collection of so-called way-finding signs — how city and tourism insiders define signs that use arrows to point pedestrians and motorists toward sites of interest — can be a study in confusion. The city's signs are scattershot and unkempt, not to mention the contradictory color schemes: Blue and green, navy and red, brown and white, and navy and yellow — all vying for visual space and all erected at different points in recent history. As city leaders look for ways to tap into the hoped-for boom in historic tourism on the eve of the 150th anniversary of both the Civil War and the end of slavery, streamlining the city's historic signs has become an exercise in futility for local museum directors.

“There are at least three different generations of signage that you can find on your way to the Valentine,” says Bill Martin, director of the Valentine Richmond History Center on East Clay Street. “One of the first things that could really help visitors would be to take down the multiple versions of signage, because there is so much visual clutter.”

S. Waite Rawls III, president and chief executive of the Museum of the Confederacy, calls some of the current signs “small” and “hard to find.” Rawls issues a challenge to those trying to find his museum: “If you get off the interstate, try to get there using the city signs,” he says, “and it ain't gonna happen.” Richmond is a destination, he says, but “not a particularly hospitable destination.”

“It's inconsistent,” sums up Adam Scher, vice president of operations at the American Civil War Center at Historic Tredegar, of the signs. Christy Coleman, the center's president, calls the current sign situation “disappointing.”

The lack of proper signs has become a rallying cry of sorts for local museum directors. Coleman says the city's slow movement on putting up new signs is inexcusable considering the “significant historic markers. … coming upon us in the next five to seven years.”

“It just seems a waste that we can't figure out a way to make it easier for our residents and visitors,” she says.

While it might seem a relatively easy fix — just put some new ones — the city has in fact been working for years to come up with a coordinated solution. But bureaucracy has routinely gotten in the way. There are issues over the public rights of way, the need for cooperation across multiple city departments and community groups, and of course, funding.

From 1999 to 2006 the city appropriated $795,000 to the Downtown Signage Program, part of the city's capital improvement budget. The comprehensive plan includes designs for coordinated navy and red welcome signs, navy and green public parking signs and navy and red way-finding signs scheduled to replace all the 1990s-era blue and green signs, which are often faded and sometimes knocked sideways or painted or bolted over to hide outdated information.

About $109,000 of the total sign appropriation remains in the budget, but few actual way-finding markers were ever put up. Most of the new signs erected over the past few years have been the navy and green parking signs; the navy, red and white “Welcome to Richmond” signs at city gateways; and similar welcome signs marking entrances to historic districts such as Jackson Ward, Church Hill and Shockoe Bottom. A handful of the way-finding signs were erected around the downtown Broad Street corridor and Virginia Commonwealth University's medical campus.

The problem, says the Valentine's Bill Martin, is lack of accountability. “There's really no one in charge,” he says. “It's confounding.”

Jeannie Welliver, project-development manager for the city's economic development department, is often referred to as the go-to sign person at City Hall. Welliver has been working with an informal working group known as the way-finding committee, comprising city officials and staff from the Richmond tourism industry and local museums, that has met on and off for the past several years to discuss ways to complete the city sign program. On behalf of her department, Welliver has requested an additional $500,000 a year out of the city's 2011-2016 operating budget — a total of $2.5 million — to complete the city-wide plan.

With no real funding prospects, however, Welliver says the committee is beginning to look for ways to secure money from private donors who have expressed interest in helping build signs in the Court End and Canal Walk areas of the city. A successful privately funded pilot sign program in one district, she says, just might pave the way to securing private funds for other projects. Indeed, outside funding appears to have built the new way-finding signs that do exist — those around downtown Broad Street and the VCU medical campus. Welliver believes the Broad Street Community Development Authority and the university paid for those markers.

“I know it wasn't paid through city way-finding funds,” she said.

Welliver's committee will next meet on Dec. 18. But the clock is ticking for the city to make a real investment in historic tourism, suggests Waite Rawls of the Museum of the Confederacy.

“I think the expression is — they just don't get it,” Rawls says. “This is a huge opportunity for the city."