City Stadium just might be the most valuable piece of real estate the city owns. So where's the plan? 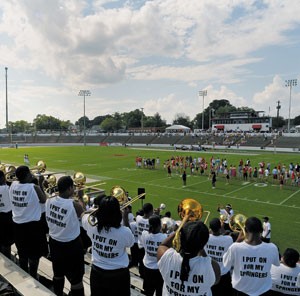 Growing a city by “design and not default,” Mayor Dwight Jones is fond of saying, starts with a comprehensive economic-development strategy. It's about “functionality” and “technical proficiency,” explains Peter Chapman, the city's director of economic development and community planning: “The cities that do it very well are very intentional about what they want to accomplish.”

Nearly three years after the University of Richmond announced plans to abandon the stadium to build its own on-campus football stadium, the city still has no development plan for the 82-year-old facility. The brouhaha that erupted in recent weeks over an unsolicited proposal to turn the property into mixed-use residential and retail center is case in point: The proposal by developer Margaret Freund, nearby residents complain, seemed to come out of nowhere.

That such a proposal would emerge, unsolicited, should hardly be surprising. Developers and big box retailers have been eyeing the stadium for years. More than five years ago, in fact, Wal-Mart expressed interest in building on the property, real estate sources say, and even submitted a site plan to former Mayor L. Douglas Wilder. Target, Lowe's, Home Depot and others have also expressed interest over the years, sources say.

None of the previous plans, however, gained any traction at City Hall.

The land mass that includes City Stadium, is, well, something of a golden triangle. The property is bounded by the Downtown Expressway, Interstate 195 and Powhite Parkway, making it a sought-after, visible location for large retailers who've been vying for years to find enough land in the city to do large-scale development.

“I've had several developers physically walk the site six months ago,” says Larry Agnew, a vice president at Divaris Real Estate. “It's a logical site, it's a logical retail play. So many people forget that it's there. For large boxes to have their names visible from 195 is a selling point.”

Agnew says that City Stadium's availability on the market comes at an opportune time. After a three-year recessionary funk, retail developers have begun site-shopping again. “People are starting to dust off their playbooks for developments,” Agnew says, especially over the last four months.

Nowadays, however, most new projects are being driven by retailers. Speculative projects, such as the one being proposed for City Stadium, are harder to come by as commercial lending requirements have become much more rigorous.

But there's no denying the appeal of City Stadium.

Paul Bratten, the spokesman for the Fulton Hill Partnership, the development group behind the proposed deal, says that the group was eyeing a number of potential sites around the city before settling on the City Stadium property. “The central location, with the way it is situated between highway onramps, makes it ideal,” he says.

Which begs the question: If developers were so attuned to the site's value, why hasn't the city developed a plan for what to do with it?

“There was never any master plan because a deal to redevelop it just wasn't on anyone's radar,” explains one City Hall source.

Talk of Virginia Commonwealth University taking over the property, and ultimately starting a football team to play there, might have also held up the process.

City Councilman Marty Jewell represents the district in which the stadium property sits. In a recent interview, he said he has previously called for a study to be conducted on the stadium's value and potential use.

At a community meeting held shortly after rumors of the proposed deal were confirmed, Jones, while assuring that nothing had yet been agreed to, hinted his support for redeveloping the little-used property. Economic development is the antidote to the city's dismal poverty rate, and Richmond “needs to produce jobs; we need to grow the tax base; we need to keep dollars from leaving the city,” he said. He promised a community “visioning workshop” to consider uses for the property.

In a statement released following the meeting, he went further. “We have to find ways to repurpose property to ensure that all of our assets are productive and move our city forward,” he said.

But not everyone is sold on replacing the stadium with a mixed-used retail complex. The Richmond region, in fact, is already overbuilt. “You can only have so much space devoted to retail,” says Brian Glass, senior vice president of local commercial real estate giant Grubb & Ellis.

According to Glass, the amount of real estate devoted to retail, on a per capita basis, is 20 percent higher here than the national average. With that in mind, any developer that takes on redevelopment of City Stadium has to be strategic about which retailers it attracts to the project. “In the end, you can put retail wherever you want, but that doesn't mean you're guaranteed to fill it,” he says.

For the project to work, says Glass, Fulton Hill is going to have to show people what it's going to look like.

So far, the developers haven't.

Paige Quilter, who lies in the Carillon neighborhood, says that despite recent assurances of transparency, the developers have yet to clue residents in as to the details of the project.

Fulton Hill spokesman Bratten declines to go into detail about which, if any, retailers the Fulton Hill group has managed to attract, saying that the project is in the preliminary stages. “Whatever retail we would pursue would be a complement to the existing retail, something that would fill the gaps in Carytown,” he says.

So, with the mayor promising more discussion, the deal appears to be in stasis. But there may be other parties interested in purchasing the property.

Virginia Commonwealth University is interested in the stadium, possibly as an auxiliary site for team sports and other events. During a recent meeting at her home, Quilter says the university's director of athletics, Norwood Teague, informed her that the university “absolutely wants the stadium.”

Unsurprisingly, Quilter says that residents of the neighborhood surrounding the stadium would be pleased if the stadium property were to remain an athletics venue. Whether that is the best use of the property is a matter of opinion.

Neighbors are scared to death, says Quilter. As such, they're more likely to rally behind an ownership push by VCU.

“VCU can make assurances that the stadium neighborhood will not be gobbled up as result of this project,” Quilter says. “Fulton Hill cannot.” S