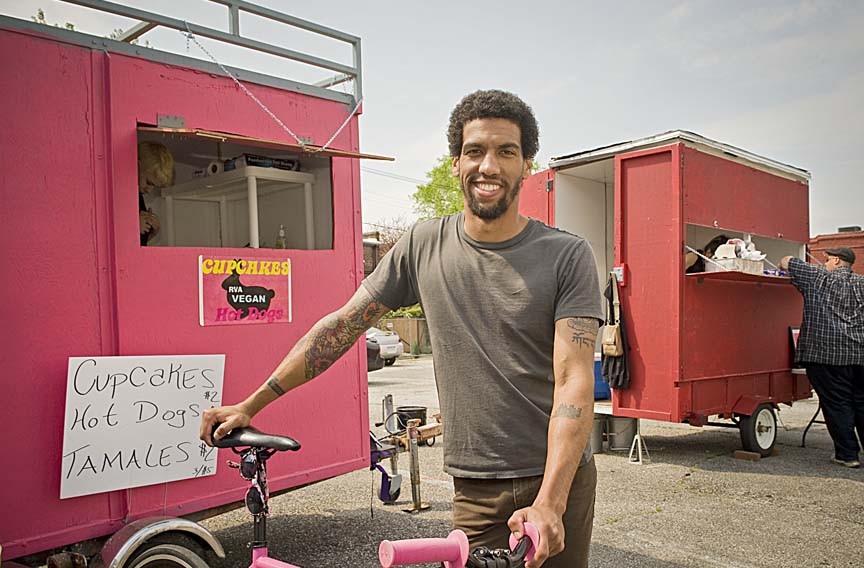 A little smack talking among food-industry guys isn't that unusual. Maybe it keeps things interesting, maybe it brings better food to the plate. So what happens when a once-friendly rivalry pits a vegan food cart owner against a taco truck owner in Richmond?

That insider's battle is being played out here — it might be for show, might be for real — over who can claim the city's first food pod — a place where mobile food vendors gather — in a town that's a few years behind the trend but eager to come up to speed.

After a series of dust-ups and snarky emails, the title appears to go to Ed Edge, a 25-year-old paramedic whose RVA Vegan food cart is staked out on a parking lot at 1825 W. Broad St. Edge and staff have run the cart for a year, selling soy hot dogs, tamales and cupcakes that are "vegan junk food, not Aspen vegan," he says of the cart's intentionally lowbrow menu.

Since last month he's been operating from the Meadow and Broad location dubbed the Grub Lot, alongside Jen and Luke Mindell's Rooster Cart and Nicole Lang's Dollop desserts. Edge signed a long-term lease with room to grow, and brought in a few picnic tables and some music to make it a food destination. It's open weekdays for lunch and weekends for longer hours. 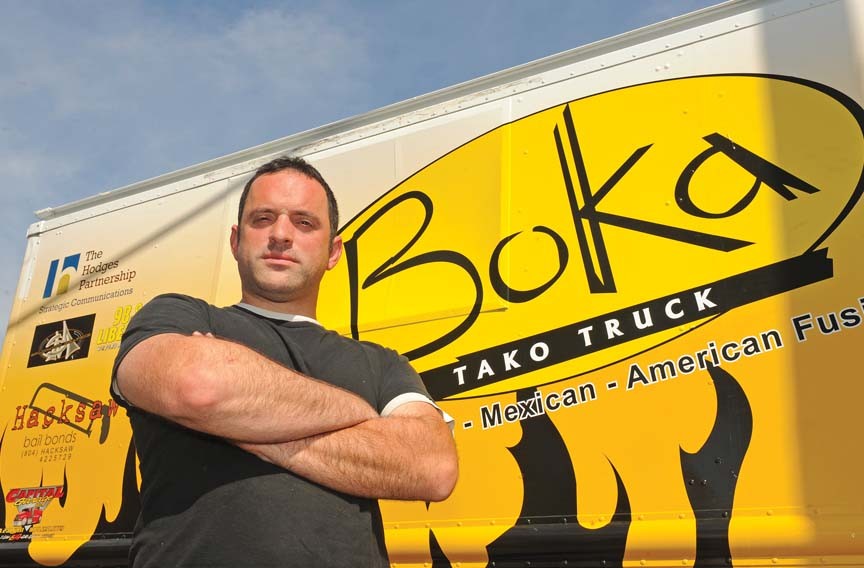 Edge's opponent, though not really a foe, is Patrick Harris, whose Boka Tako truck business just added a second rig and brokered a new truck pod in the parking lot of the Virginia Historical Society a few blocks southwest(foodtruckcourt.com). Harris is known for adept use of social media and for a fanatical customer base at his regular corporate lunch stops around town. Harris' truck pod in the society lot is set for a trial run this month (April 3, 6, 10 and 13 from 6-9 p.m.) and may become a scheduled fixture there, with at least six vendors so far. Technically it's the first food truck pod, and the Grub Lot is the first cart pod. Edge sees it as a truck-versus-cart thing — with the plywood and bike-wheel handmade carts the 98-pound weaklings against Boka's 25-foot, vinyl-wrapped Chevy truck, which is expensive, visible and much more mobile.

Both guys say they've advanced the mobile-food cause here, and both have. Timing is close enough that it's not coincidental, but not purely competitive either, and certainly a win for customers who now have more eating options. While the Grub Lot "is growing organically," Edge says, the Boka-led lot is fueled by Harris' bolder publicity methods. "I rallied the rodeo, and this puts Richmond on the map," he says. Victory dances fueled by street food are sure to follow.

Big doings at Bistro 27: Chef Carlos Silva has brought in chef Campbell Tucker, formerly of Stronghill Dining Co., to help redesign lunch and dinner menus for spring. Also new are the bar menu and craft cocktails of master bartender Bobby Kruger (who shares his "Mad Men"-inspired drink updates with columnist Jack Lauterback here). Kruger's running a late-night speak-easy there Thursdays through Saturdays from 10 p.m. till closing. Kruger has a following, as do Silva and Tucker, so expectations are high for new energy at this downtown jewel with its friendly, food-savvy clientele.