This Week: Another Round 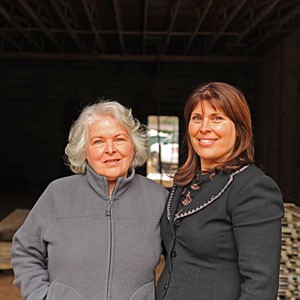 How hard is it to keep a successful chef out of the kitchen? Ask Stella Dikos, who returns after a five-year partial hiatus to unveil a new venture in Westhampton, another Stella's. Many Richmonders recall her previous restaurant on West Main Street (now Rowland Fine Dining, her hand-picked successor). Diners found some of Dikos' Mediterranean specialties at 3 Monkeys but kept asking when she'd open a new place. Now it's under construction, the brick work complete, and poised to bring a new presence to a quiet retail block between Monument and Franklin on Lafayette Avenue.

Stella's will be operated by Dikos' daughter Katrina Giavos, who recently sold Gibson's Grill at the National in order to focus on the new venture. Katrina and Johnny Giavos are among the city's most energetic restaurateurs, with holdings at Sidewalk CafAc, Kuba Kuba, 3 Monkeys, Kitchen 64 and the seasonal ice-cream shop Sweet 95. Stella's should open by early summer.

“It is who my mom is,” Katrina Giavos says. “We're going to bring back all of her specialties in a casual, neighborhood-friendly, very rustic and homey place. I want to give that to the neighborhood — just simplicity, amazing food in a nonpretentious way.”

Dikos will lead the kitchen crew and share elements of Greek culinary culture inspired by a trip to Santorini last July with her daughter and granddaughter. They visited the neighborhood where she grew up, climbed to the island's highest point, sampled a plethora of local foods and wines, and fine-tuned the plan to get mother and daughter working alongside each other once again.

Emir Vejzovic has the usual start-up story for Balkan Restaurant, reviewed in this issue: “Everybody was telling me I was crazy,” he says — “the economy, a new cuisine, I had a baby June 18 and we opened in mid-August.” Vejzovic gave up a corporate-food job of five years to take over a lease at the former Istanbul on Patterson Avenue, hoping to put into practice all he'd observed while selling packaged products to local restaurants.

He knows what's precooked in town, and which kitchens are for real. “People are saying that time is money,” he says, “so instead of paying a person to do something, they pay for a half-done product and serve it. I'm not at all a fan of chain restaurants — I think simple is better.” Though he admires the work of some former clients, he saw others in the business making mistakes. “Always learn first what not to do,” he says. “I looked at what people were doing wrong. It's important to gain the customers' trust, that when they turn around I'm not going to raise the price. Greed is going to get you.”

“My perception of things is different,” Vejzovic says. “I lost everything … my parents lost everything they'd worked for for 30 years.” He left Bosnia for Berlin, and then Richmond in 2000 (“honestly it was cultural shock to me,” he recalls). Now he's married with two young children, a restaurant that's attracting interest, and only about 10 months left on his lease.

What's beyond that? Always something small, Vejzovic says of a future location, with food prepared in-house with good ingredients and watchful owners, including fellow Bosnian Vedran Oklopcic, a partner in the business whose mother contributes recipes. “I think if you have a good taste you can make anything,” Vejzovic says. “I knew one thing — we're not going to be mediocre.”