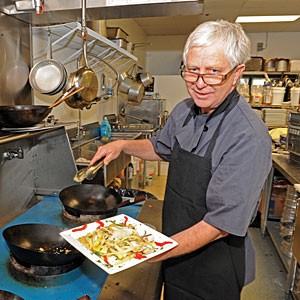 Front Burner
Nuccio Giambanco thinks he may be the first chef to use a special three-burner Chinese wok to cook his Italian pastas. “This is new for Richmond and probably the nation,” the longtime chef says, pleased that his idea of cooking pasta with three sauces — red, alfredo and garlic oil-based — in the imported woks will speed things up for customers at his newest business, Osteria la Giara in Short Pump.

Giambanco speaks of other innovations he's brought to town since operating Nuccio's in Chesterfield and before that Figaro's: fresh calamari and bruschetta, now on many menus but not always the case here. “When I first came to Richmond, what was left out of most Italian restaurants was the good stuff — the Italian olive oil, the fresh ingredients,” he says. “People need to know real Italian cooking, nothing frozen. It's the love of cooking that has been in me since I was 10 years old, helping my mother in the kitchen. Soon I had to do all the cooking!” he says, laughing.

Osteria la Giara, loosely translated, is a tavern and pantry where the good provisions are traditionally kept — the oil, wine, tomato paste in clay jars, black and green olives, beans and sun-dried tomatoes. Look for those ingredients and more in the new 120-seat space, where a Sicilian rice bowl, chicken, veal and seafood entrees and build-your-own pasta, as well as pizza, are highlights. Open for lunch and dinner daily. Towne Center West, 269-3602.

Christmas at the museum: It's a first — the Virginia Museum of Fine Arts opens to the public on Christmas and New Year's Day, with free admission as usual. Amuse, the fine-dining restaurant upstairs, will serve holiday menus. Reservations are suggested. 340-1400. vmfa.museum.

New Year's Eve
Acacia Mid-town is taking reservations for a fixed-price dinner. The four-course meal, with options including salmon carpaccio, braised veal cheek and tomato fondue, pan-roasted venison and other succulent dishes, is $49 per person. Reserve at 562-0138. See the website acaciarestaurant.com for information about a crab cake to-go dinner for the holidays, catering and other ways to eat well at the business Style Weekly named its restaurant of the year for 2010.

Pescados China Street rolls out a series of weeknight deals and a five-course dinner for New Year's Eve. The new Oregon Hill hot spot offers cheap date night on Tuesdays, half-price wine on Wednesdays, and a recession-buster discount Mondays through Thursdays from 5-6 p.m., with fundraising for charity on Mondays. See pescadoschinastreet.com for details.

On the North Side, a returning New Year's Eve tradition at Tastebuds American Bistro is the four-course, fixed-price dinner. Seatings are 6 p.m. and 8:45 p.m., cost is $50 per person, and menu details are online at tastebudsamericanbistro.com. 4019 MacArthur Ave. 261-6544.