This Week: Italiano in Midlo 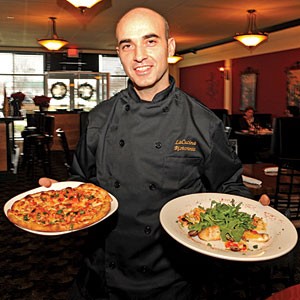 Italiano in Midlo
Pizza is best eaten right out of the oven. The cardboard box and the time it takes to drive home can change the crust's texture.

That's a shame, says chef Vito Bellantuono, who sometimes encourages new customers to take a taste before they carry out his pizza. His new business, La Cucina Ristorante Italiano & Pizzeria, in the Shoppes at Bellgrade, is the third venture for the Italian-born owner. He sold his interests in Chianti in Gayton Crossing and the Italian CafAc in Sycamore Square, and is now at home in a space that was recently an Indian restaurant. New red walls, a bar at the front, and a cheerful staff make it a welcoming spot, but it's the food that's capturing the neighborhood's interest.

The pizzas have a tender, flaky crust and a crushed tomato sauce that's slightly sweet. Panini on focaccia or Tuscan bread are spread with pesto butter and lavished with grilled meats and vegetables. Pastas are traditional — the Michelangelo is a top seller with chicken, shrimp, sausage, red peppers and artichoke in a light pink sauce. The chef's favorite entree, principessa, has top round, milk-fed, natured veal medallions and spinach, mozzarella and shrimp in a wine and tomato sauce, for $19.95 including a side vegetable or pasta. Seafood entrees are just less than $20, and appetizers such as seared scallops, grilled shrimp and calamari are about $9.

La Cucina adds its Italian presence to a shopping center bedecked with holiday lights and a number of new and longstanding dining options. There's 12-year old River City Diner, still a family friendly classic; Ruth's Chris Steak House in a circa-1732 plantation house; and relative newcomers Outer Banks Seafood Co., Zen Asian Bistro, with Great Seasons filling out the corner space that once held a failed offshoot of Ellwood Thompson's and is now a restaurant and catering company.

For the animals: Strawberry Street CafAc in the Fan, one of the area's longest-running restaurants, opens for Christmas Eve brunch, 9 a.m. until 2 p.m., with a portion of sales benefitting the Richmond Society for the Prevention of Cruelty to Animals. 421 N. Strawberry St. 353-6860. strawberrystreetcafe.com.

Now empty: The Patio, near Innsbrook, has closed after its predecessor, Dd33, switched from Asian fusion to a sports-bar menu. Also closed is Little Saigon, a Vietnamese restaurant on Robious Road. Vito's Pizza near Virginia Commonwealth University is no longer in business. Lucille's Southern Cuisine on Brook Road has closed after a brief run; Lucille's original Laburnum Avenue location remains in business.