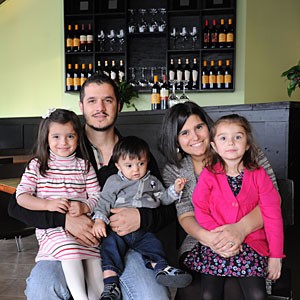 Are there too many restaurants in Richmond, and too much pizza?  “Oh yeah, of course,” Antonio Altadonna says on the eve of opening another restaurant serving more pizza. Richmond goes after the new thing, he's noticed, but consistency and price can get the job done — enough to allow another child in his increasingly in-the-black household.

This time, it's a North Side version of Arianna's, the 3-year-old Italian workhorse at 700 N. Sheppard St. The new space on Lakeside had a troubled past as Zed CafAc and the Fat Goat, but a food-desirous neighborhood. “We were looking in Bellevue because a lot of our customers are from there,” Altadonna says. “People are excited — it is the name recognition,” and the casual, family-oriented approach that have found a following.

Altadonna and his wife, Mary Angela of the Richmond pizza dynasty, put themselves into the project, where he will cook now that construction is complete. His handmade tables and booths, new tile and paint give a less industrial personality to the space, which seats about 80. On the menu, new vegetarian pastas, chicken Arianna and other entrees will be served for lunch and dinner daily, with takeout and limited delivery. Arianna's Italian Grill and Pizza opens this week at 5107 Lakeside Ave. 627-0314.

Avenues update: The Arcade Cafe is closed and the space for lease. Perhaps not coincidentally, business continues to grow across the street, where CafAc Caturra does a steady coffee-to-wine bar turnover daily at 5801 Grove Ave. With house-made food (note the minidesserts), occasional live music, the big stone fireplace and a very Westhampton clientele, it's a draw in the reinvigorated retail corridor. The strength of retailers J. Emerson Wines and Gearhart Chocolates give local-food cred to the neighborhood. Also for lease: the former Peking spot, a dream location for what restaurant, Richmond?

Private label: Folks seem pretty excited about the release of a new wine, the Patricia Green Osaka Cuvee, at the Huguenot Road location of Osaka Sushi & Steak. The pinot noir blend, produced with grapes from the winemaker's estate, is praised for its velvety balance and a minerality that “lingers languorously on a brooding tannin-saturated finish,” a reminder that wine tasting is one of life's steamy romances. A limited release of Osaka Cuvee is sold by the glass for $12, potentially paired with the Patty Green, a crabmeat salad and crunch roll topped with salmon and tuna. Be sure to notice the evolving dAccor and lighting at this soothing, service-minded standout. 288-8801. http://www.osakasushiva.com.   '