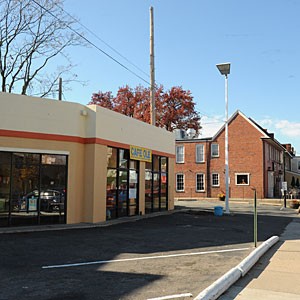 “It's been a whirlwind,” owner Betsy Thomas says, and it's not over yet. Tweaks are still in progress at Carytown Cafe Ole, which opened Black Friday in the former Ben & Jerry's space at Cary Street and Colonial Avenue.

Fans of her downtown lunch spot's tacos and burritos will find the same menu — although the sought-after fish tacos will debut a bit later — and a small eat-in area with a few tables and a counter at the window. Its location across from the Byrd Theatre gives it high visibility and easy access, particularly for takeout, a key component of the business.

“I'm so happy to be getting back to Carytown,” Thomas says. She ran Betsy's, the coffee shop, for nine years (it still bears her name) and was an advocate for and noted presence in the neighborhood.

Eventually, the business will open on Mondays, add later hours and install hand-painted signs by artists Chris Milk Hulburt and Ed Trask. Thomas hopes the city will agree to a rooftop cactus garden and eventual outdoor dining, but the first priority is getting food in front of customers, such as her favorite spinach burrito with cheddar, black beans and house-made pico de gallo.

The Lunch Porter:  Well into its trailblazing run in Manchester, Savor CafAc is now going by a new name — the Lunch Porter. It's still the same contemporary breakfast, lunch and take-away spot owned by chef Ellie Basch, but another food-service company has rights to the Savor name. Basch lists a number of holiday events, including a wine tasting in early December, on its website, thelunchporter.com. 201 W. Seventh St. 527-2867.

Sous vide at Six Burner:  Chef Philip Denny takes the cuisine at the Fan's Six Burner Restaurant to a new level with the sous-vide cooking technique, now approved by the government health agencies that regulate such things. Vacuum-sealing and temperature control are part of this French cooking process, which allows flavors and textures to be manipulated into taste potency. Top chefs have cooked sous-vide for years. In Richmond, other than a brief stint at Dd33 (now the Patio), Six Burner says it will be the first here to offer meats and other menu items cooked via the method, in addition to traditional preparations. Denny says braised short ribs and duck confit will be two items prepared sous vide at the restaurant. 1627 W. Main St. 353-4060. sixburner.net.