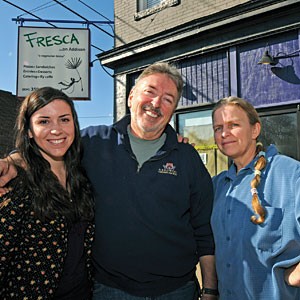 One of the unlikeliest pairs to share the same kitchen is about to do it: Jimmy Sneed, famously salty serial opener, and sweet, serious Jannequin Bennett, the vegetarian chef and author with a reverent following. Their spot is an open-kitchen cafe, Fresca on Addison, where much of the action surrounds the Nabil Attie-designed pizza oven. (“Todd English just ordered four from him,” Sneed says.) They're experimenting with pizza dough and crusts to launch this 32-seat thing any day now, bringing an all-veg menu to a promising corner.

Mediating and managing will be Jenna Sneed, the chef's daughter, now divested of Carena's Jamaican Grille in south Richmond and putting her dietary ideals on the table. “I've had Jannequin's cookbook for eight years,” she says, and helped recruit Bennett for the three-month consulting gig at Fresca. Self-described happy vegan Sean Everett (Ellwood's) also works the kitchen, where stews, grains, salads, desserts and Illy coffee are menu mainstays.

A beer and wine license is pending, hours are being set, and food is being played with as the team builds its repertoire. Sneed's skill at drumming up interest is visible even in drive-by: quotes and come-ons and a (presumably vegetarian) mannequin have opened a dialogue with the neighborhood, which seems to be gaining critical mass among eaters.  22 S. Addison St.  frescaonaddison.com.

Mainstream opened Tuesday in a warmed-up version of Cirrus at 1731 W. Main St. Chef James Williams, lately of LuLu's, does soups, sandwiches, burgers and a daily risotto, with entrees for the dinner crowd. At the bar (ABC license pending) are 20 wines by the glass, bottled beers and a weekday happy hour. Open daily. 353-1489.

The Corner CafAc just installed all-new kitchen equipment and is still weeks away from opening in the Museum District. Manager Dale Barta says it's still a work in progress after a complete gut job. We'll have details when it's photo ready.

Cupertino's is bringing its cult-fave bagels downtown, and not a moment too soon, at 1215 E. Main St. The former saddlery and mercantile space now has a counter-service layout and seats for 50, with weekday breakfast and lunch and some weekend hours as owner Walter Baietti sizes up demand in the neighborhood. Cupertino's bakes its New York-style bagels in its Innsbrook shop and will make other food on site in the newly installed, downtown kitchen. Baietti hopes for a Dec. 1 opening.

Benny's BBQ is inches away from a new lease and an announcement “that will be huge — huge,” owner Richard Cacciotti says about the still-secret location. He's leaving the long-running corner spot in Stratford Hills next month and launching a wider menu in a place “that will be a big deal for Richmond. Big!” Consider the campaign started.

In the former Main Street Mocha, Fire & Ice is a new weekday takeout spot with a bonus massage chair by the front door. Wrap combos are $6.99; the “I love Amsterdam” is a Dutch pancake rolled around fruity spread. Also on the wrap list: veggies with hummus, cold cuts, sweet and sour chicken, tuna, four cheeses with ham. 1110-B. E. Main St. 225-0005.

It Has a Code Name

Buttermilk Palace — “the most ridiculous name I could come up with,” chef and owner Kendra Feather says of her new project in the former Que Pasa space in Church Hill. The building is under construction — again — but it's hers by acclamation. The neighbors are clamoring for more of what Feather's doing at Ipanema CafAc and Garnett's in the Fan. Something about Church Hill is clicking fast, Feather says, “and I have a strong desire to be in that community. I'm really impressed with how they want this to work.”

The project doesn't have a name or specific menu, but a chef familiar to diners here officially will be involved by spring, and cuisine is likely to take a play or two from Southern standard-bearer Edna Lewis. Watch for anticipatory chatter on Church Hill People's News.