This Week: Brains With Breakfast 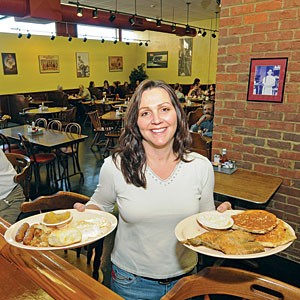 It's one of the few places in Richmond to get brains and eggs for breakfast. It may be the best place to meet a man before work, especially a hungry one. It may serve the most food for the least money the fastest and friendliest, or at least that's the goal. And now that McLean's Restaurant has moved to a far spiffier spot after a 30-year run up the street, it has the same regulars and a new set of customers settling into the familiar booths and wooden chairs.

Losing the lease at McLean's original spot could have closed the business, but owner Dionna Kelleher took it as a personal challenge. “McLean's is who I am,” she says. “I've been there since I was 15, and some of the customers have known me that long.”

She and her husband, Barry, bought the business two years ago from her parents, Fred and Sheila Wagner, who ran it for 22 years and still work there. Instead of leasing again, Kelleher bought the building at 3205 W. Broad St., a former motorcycle shop that has room for growth. She'll start late-night food service on weekends in a few weeks.

Breakfast is a big draw at McLean's, and salt herring is one of the stars, to the tune of 100 pounds a week. Another top seller is the $5.85 breakfast — three eggs, grits, meat, potatoes, biscuits and juice; the lunch special at $4.95 has two vegetables and an entree from a monthly list, including catfish, chicken, boiled cabbage and ham. The seven servers are college students, but it's all longtimers in the kitchen: cooks Evelyn Crockett and Valerie Murphy, with Barry Coker in his third decade at the grill. “If there was an egg competition anywhere,” Kelleher says, “he would win it.” Open daily 6 a.m.-3 p.m. 358-0369. mcleansrestaurant.com.

RRW Update: Richmond Restaurant Week finished strong last month with a  donation to FeedMore still being tallied. “Each year it gets bigger and busier,” says organizer Aline Reitzer of Acacia Mid-Town, where a record 1,300 diners rallied for the cause. “We hype up our staff and energize and motivate and hopefully set a standard,” she says. “The goal is to put forth the best menu and the best experience to gain new guests, all for a good cause.”

Last year's event raised $23,000 for the food bank, which translates to more than a million meals for the needy. And while Reitzer says she and her committee heard some complaints about which restaurants are selected to participate, there won't be significant changes. The event will continue to be held in October, and participation will be by invitation. Restaurant Week began in 2001 with nine restaurants and involved 28 this year. “We promise to grow each year and we do,” Reitzer says, “but my biggest concern is to maintain the integrity of the event, which is 100 percent volunteer.”

There's a waiting list, and some owners say they're shut out without explanation. “It is an opportunity for Richmond restaurants to bond together and benefit a charity in line with our business, which is food,” Reitzer says. “We grow at a steady rate, we make notes about how to better ourselves, and we try to keep a pulse on how the other restaurants are doing. We evaluate on an ongoing basis. I am tickled at how this event has gone. My priority is to keep the event moving forward and protecting the restaurants. It's a shame that any negativity is involved.”

Three local restaurants held their own unofficial benefits during the week and one received a cease and desist letter about doing so. To those restaurants not on the official list, Reitzer suggests finding an alternative project. “It is my hope that other businesses will find their own way” to raise money for charity, she says.