1 North Belmont and other closings, whispers of stripping on 3rd Street and more. 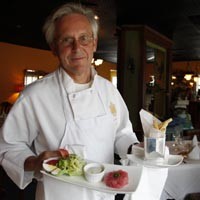 Frits Huntjens drank Champagne with everyone else in his restaurant on New Year's Eve. “We made the best of it, and we walked around with a stiff upper lip,” he says, though he and his guests knew it was the French restaurant's last night in business

“I drank to the year that was finally over, and said good riddance,” Huntjens adds. “My problem was, by all accounts, I was going to be in for a very rough ride this year and I just don't have deep enough pockets to do this.”

Closing 1 North Belmont, his five-year-old, critically acclaimed Museum District business, was the inevitable result of declining sales in a troubled economy. “When I looked at the numbers, I realized I'd be the only one in the kitchen, with one person in the front, and I still wouldn't be able to pay the bills. I hate to say this but we really didn't get the support that I felt, and maybe some others felt, that we deserved.”

And this is only the beginning of a new year's slaughter, he grudgingly predicts. “I feel for everybody else who is maybe a few months away from where I am today. That's going to happen -- this is the tip of the iceberg, I hate to say. I predict that a lot of restaurants are going to go this way. I don't see the economy turning around that quickly.”

Huntjens, who was a James Beard award nominee and a regular recipient of the AAA 4-star award, says he was disappointed to break the news to AAA officials, who've seen a gradual erosion of upscale restaurants in recent months.

“Richmond is just too small to support something like this,” Huntjens says of the $30-plus entrees and pricey wines that established the restaurant's special-occasion reputation. “That image wasn't a bad thing for four years -- in fact it helped,” he says. “I think you could spend the same amount at other places, but here you had the choice meats and seafood and all of those expensive things like caviar and foie gras and lobster. Now it just doesn't exist in Richmond.”

It's the memories that haunt and sustain him. He and his wife, Andrea, were married in the restaurant five years ago. His mother came from the Netherlands to eat there, ecstatically. A woman cried with joy over her Dover sole, and guests regularly raved about the rack of lamb he gently pan-seared, painted with Dijon, crusted with pistachios and roasted to medium rare. For some dishes, food costs soared to 55 percent, a killer ratio by any standard. Add the 80- or 90-hour work weeks, the grueling books-balancing, and the constant search for more regular customers, and it was an impossibly steep hill to climb.

For the time being, he'll help with his wife's catering business and sell video phones for an international company. And he'll enjoy some rare time off, seeing movies and visiting Can Can, among other places. He doesn't rule out a return to the food business with perhaps a simpler formula in the brasserie style, or in another market or with new partners.

“To be honest, I am so sad that I can't stand on that line and baby those plates and make people happy in the restaurant,” he says. “Working so hard doesn't bother me, but having to scramble every month for money, to put personal and family money into it, trying everything, what's left?”
“I struggle with Richmond in terms of being able to do a really nice restaurant,” he says. “Mentally I've prepared myself for it, and there's a degree of relief. But I'll miss it for the rest of my life. I can't emphasize it enough, support your local restaurants. If people only realize how much we support the community and pay taxes and wages and the enjoyment we provide — we're all different and we're all entrepreneurs. It's great for a city to have all these different restaurants and all these individuals putting their entire heart into it. God, go out and support them.”

Degifting: A voice-mail message at Verde offers cash refunds for people who received gift certificates for meals there. Owners of other recently closed restaurants should follow suit with refunds, but gift-card holders should act quickly. Last year several disgruntled readers complained to Style Weekly about being left holding worthless certificates when restaurants went out of business after the holidays.

Verbena: The once-bustling, upscale restaurant at Floyd and Robinson streets also closed Jan.1, though the brand may reappear somewhere else in the future. Commercial filmmaker and Fan resident Sunny Zhao is preparing to purchase the property and will reopen it next month as Fan House. The space will be reconfigured with a big bar downstairs and an East-meets-West menu with ideas collected on Zhao's world travels.

3rd Street Diner: Look for changes at 3rd Street Diner, one of downtown's only all-night eateries. Word is the place will turn into a strip club upstairs once new furnishings arrive.

Feasts for beasts: Orphaned dogs and cats can only dream of food this good. The Richmond SPCA announces a series of monthly restaurant dinners where 15 percent of proceeds goes toward the humane organization's work with homeless animals. The line-up is: Jan. 13, Zeus Gallery CafAc; Feb. 3, Lemaire at the Jefferson Hotel; March 3, Enzo's Ristorante and Tavern in Goochland; April 7, the White Dog; May 5, Avenue 805; June 2, Hondo's; July 7, Bottoms Up Pizza. Sign up online at www.richmondspca.org/supperclub to get reminders and updates.