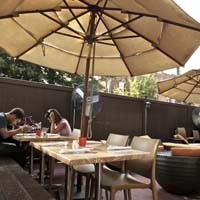 Terrace on Main Street
It's hot, it's humid, and therefore it's patio time in Richmond restaurants, where outdoor real estate is highly prized for its return on investment. Some new favorites include the umbrella-covered backyard terrace at deLux, 2229 W. Main St.; under-the-pergola tables at Ellwood Thompson's coffee house at the western edge of Carytown; the minimalist front porch at Acacia, 2601 W. Cary; Si Tapas, 214 N. Lombardy; and the breezy side terrace at Bogart's, 1903 W. Cary St. Coming later this summer, another option will be at the Black Sheep, 901 W. Marshall St., where permits are pending.

Feeding Frenzy
Positive Vibe CafAc: Dearly departed Richmond musician Gary Gerloff gave one last gift to the business he fondly called the “Positive Vice” May 27: The party after his funeral at the cafAc jammed the place on what would have otherwise been a slow Wednesday night, introducing many to the business that Gerloff found enduringly endearing. His support of the cafAc's training mission included volunteer appearances by the Gary Gerloff Band at the annual fundraiser Vibefest and other events. Many folks in the crowd found new reasons to frequent the Stratford Hills business in honor of their beneficent and fun-loving old pal. www.positivevibecafe.com.

CaryTown Teas: Patricia Adams, owner of this specialty shop and tearoom, won two first-place awards at the 2009 World Tea Expo in Las Vegas last month, for best overall blend and best iced-tea blend for her brew named the Rouge d'Afrique. Her shop at 24 S. Nansemond St. is a treasure trove of information, accessories and fine teas, which also are sold through the Web site. 358-8327. www.carytownteas.com.

Goochland Farmers Market: New manager Jane Conner, formerly of the Poe Museum, takes over, while former market manager Brian “Cricket” Rakita moves to a full-time position as an organic inspector. The Goochland market's growth is encouraging, says Lisa Dearden of the Center for Rural Culture, which operates the market. “People really care about our organization's mission, which is focused on preserving our agricultural land, heritage and traditions. … I believe there are just more people out there now who really care about our local food system and want to play a part in it somehow.”

The Tobacco Company: You've seen the crowds lining up every weekend to get into the club downstairs, but maybe you didn't realize this Shockoe Slip institution is celebrating, too — its 32nd year as a Richmond trailblazer in one of the city's most important tourism areas. The restaurant has a summer calendar loaded with events, including wine tastings with hors d'oeuvres by chef David Mussi for $10, giveaways and a $77 dinner-for-two deal. That includes an appetizer, entrAce and dessert, with options from fried ravioli, salmon or prime rib to the restaurant's famous English trifle or other sweets. For the livelier crowd, “Blame it on Rio” nights feature drinks made with cachaAa, a Brazilian rum-like liquor, accompanied by Latin music and maybe a few sexy dance moves. 782-9555. www.thetobaccocompany.com.

Eurasia: Now serving a wine-bar menu of seafood, salads and other vine-friendly dishes in the Gayton Crossing Shopping Center. Lunch and dinner Monday through Saturday, wines by the glass and bottle, and outdoor dining. 1308 Gaskins Road. 740-2525. www.eurasiarich.com.

Next week in Short Order:  Details on the all-new Mosaic CafAc in the River Road Shopping Center, which introduces a bar and full table service to this popular meeting place.