The Boathouse at Rocketts Landing offers up something new: A bar by the river. 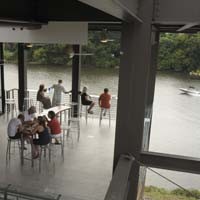 James, the river, is the star attraction at The Boathouse at Rocketts Landing, which opened to anticipatory throngs last week and is the latest big thing on the city's astonishingly vital dining scene. The eventually 12,000-square-foot restaurant, likely to be Richmond's largest, captures panoramic views of water and the downtown skyline from its windows and balconies; it's decked out in boat-worthy blues and greens, undulating fixtures and a pebble fireplace, with ample seating at booths, bars and tables.

“It's got the best drink rail on the East Coast,” designer Helen Reed says of the outdoor glass ledge positioned above boats and the under-construction Virginia Capital Trail. A tented party pavilion and additional dining rooms will be unveiled in coming weeks.

Boathouse owner Kevin Healy knew the setting was key — just as it is at his long-running Boathouse at Sunday Park. That lakefront business in Brandermill consistently attracts a deck- and bar-loving crowd. Its menu of seafood, steaks, Napoletana pizza and raw-bar items is repeated at Rocketts, prepared by former Bookbinder's chefs and managed by restaurateur Steve Parry, who's developing more East Coast projects than anyone else in town.

The Boathouse is the first retail business to open in Rocketts and will be the first to offer to-go orders to boaters docking at the project's new marina. Serving dinner nightly, with bar specials and Sunday brunch. The Boathouse at Rocketts Landing, 4708 E. Old Main St. 622-2628. www.boathouserichmond.com.

The Belvidere at Broad, which opened in late July, is already charming the First Fridays crowd and a certain architecture critic, among others, at 506 W. Broad St. Owners David and Julie Hassen have converted a 1920s bicycle shop that once held a Buddhist shrine into a warm and welcoming spot for dinner and eventually Sunday brunch.

“We wanted it to be casual but not a dive,” Julie Hassen says, “a mix of old and new. We recycled anything we could, and so far it's been really well received.”

EntrAces are moderately priced; the room seats a dozen at the bar and another three dozen at tables and booths. Non-smoking. Open Tuesdays through Saturdays from 5 p.m. 344-0644. www.thebelvidere.com.