This Week: Squirrel food at the Diamond, beer and brunch at Caliente. 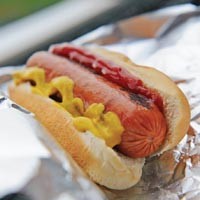 Squirrel Food
If you thought the Flying Squirrels baseball marketing blitz was over the top, you'll find even bolder hyperbole from the rodents' food-service team. These guys are practically guaranteeing that fans will love the food they're selling.

“Prepare to be amazed,” the team's food service director, Justin Rink says. “Aramark is gone. There's no more contracted food service, it's strictly in-house, something that's never been seen before at The Diamond. Opening night will be a food and beverage night in history.”

With 32 points of sale throughout the ballpark, concessions will be close at hand — including the inevitable squirrely fries, burgers, dogs, pretzels, beer in aluminum bottles, wine and funnel cakes, not necessarily consumed together. A carnival of costumed “vendor-tainers,” as they're called, will work the upper levels and sell “a little of everything,” Rink says.

“We're about the food and beverage experience,” he says. “We want people to want to come here just to eat.” Recent test runs at Virginia Commonwealth University games got raves for the Ball Park dogs, grilled on-site and not held in food warmers, priced at $3. Smaller kids' dogs will be $2, and the team goal is that a family of four can watch the game and eat for $50. Opening night at The Diamond is April 15, but the smells of summer are already in the air.  squirrelsbaseball.com.

Feathernesters: Chef Jim Prinkey is new head of culinary operations at Feathernesters, a tea room and garden shop in Lakeside. Prinkey worked at La Petite France and the Farmhouse at Manakin Road, and will serve a changing luncheon menu, dinner on Friday nights from 5:30-8:30 and Sunday brunch. Owners Tony Turner and Marc Goswick say they're committed to serving local produce from their neighbor, the Lakeside Farmers' Market, which opens in May. 6118 Lakeside Ave. 262-7305. feathernesters.com.

Carytown Cafe Ole: Downtown lunch spot Cafe Ole gets a sibling this summer. Owner Betsy Thomas plans to open a new cafe with the same Mexican menu at 2901 W. Cary St., in the former Ben & Jerry's ice cream shop. The cafe will be open from 11 a.m. to 10 p.m. daily, with a small eat-in area, an eventual outdoor dining space and an emphasis on take-out orders. Cafe Ole has a brisk following for its fish tacos and other affordable Mexican-style dishes.