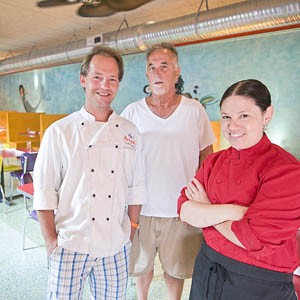 A striped pole at the entrance is a clue that this isn't some random dive. That and the building is a fearless shade of pink. All traces of the infamously gritty Chuck Wagon and later the Hollywood Grill are gone, promising a different scene at China and Pine in Oregon Hill. Finally, after a laborious 28-month run-up, Pescados China Street is ready to party.

An imaginary surf is as nearby as the Marcia Germain-painted murals of the owners — Bob Windsor as a studly 23-year-old in Ocean City, Md., Todd Manley posing with a just-caught wahoo at Oregon Inlet, N.C., when he was 12. It's a casual but conscious place, and the partners are suntanned and grinning when they greet opening-week guests with sangria, fish tacos and a big measure of relief.

Head chef is Loretta Lane-Montano, who spent months rehearsing the menu at Pescados on Midlothian Turnpike, the mother ship that remains profitable and open. She's a French Culinary Institute grad who's worked in France and here at Bacchus and Edible Garden. “I'm pretty serious,” she says. “Todd's the lighthearted one, but we're committed to quality food and nice presentation … white-tablecloth food without the white tablecloths.” They're using local and organic produce and wild-caught ingredients, including overnight shipments of Hawaiian big eye tuna that's served rare with asparagus, white bean muAñeta, cucumber-jicama slaw and a lime-cilantro-serrano aioli for $27.

Other menu items include pizzas — in braised pork, roasted vegetable and tuna versions, $9-12; seviche of the day, $11; conch fritters on local microgreens for $8; and voodoo shrimp, flash-fried oysters, and grilled calamari with peppers, chorizo white beans and yuzu vinaigrette. On the big-plate side of the menu, enchiladas Acapulco, crab cakes, lemongrass lobster, vegan poblano relleno, a rib-eye and glazed pork chop fill out the options from $16-$29. Bar sitters can see into the kitchen and can order margaritas, mojitos, martinis, wine and beer, and two drinks they can't get at the block-away neighbor Mamma 'Zu: Diet Coke and decaf coffee.

Now that his building's been renovated by contractor Windsor with a roomy new stainless and tile kitchen, Manley's admitted clean-freak tendencies can get down to business. He hopes to add a patio in back by spring. For now, the 50-seat Pescados China Street serves happy-hour specials and dinner Tuesdays through Sundays, with lunch and brunch hours on the way. 626 China St. 644-3474. pescadoschinastreet.com.