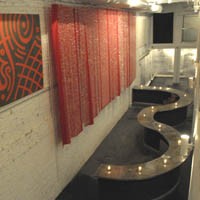 In the Vault
April can't get here soon enough for the clubbers who've waited more than a year for the downtown bar Vault (above) to open. The two-level, industrial space offers five VIP rooms — each with its own server and free appetizers — and will operate in tandem with the Bank, the restaurant and nightclub upstairs. See www.bankandvault.com for events, hours and details. 1005 E. Main St., 648-3070.

Istanbul: Waiting for discovery in the West End is this reader favorite at 8905 Patterson Ave. Its Turkish menu includes raved-about moussaka, beans with lamb and a mezze platter. Prices and seasonings are moderate, and owner Yasemine Patton knows her stuff. 741-5761. www.istanbulmedcuisine.webs.com.

La Cave: A French-inflected cafAc and wine bar operated by the owner of Bella Arte, a North Side business that closed in August. Now open in the former Jet Set boutique space in Carytown, La Cave, with tufted blue banquettes and a retro feel, has a short menu of deli sandwiches, soups, tapas and cheeses, with wine by the glass, natural French Teisseire syrup served with water or milk, and mousse and tartes for dessert. Open for lunch daily except Monday; dinner and wine nightly except Sunday. 2925 W. Cary St., 355-3131.

BoDillaz Famous Quesadillaz: Virginia Commonwealth University-area business opened last month, serving overstuffed tortillas in flavors such as cheeseburger, buffalo chicken, southwestern Cajun and bacon, and egg and cheese. Open at 916 W. Broad St. from 11 to 11 daily. But maybe it's better to call for delivery because they come dressed as a jalapeAño. 269-5924.

UNICEF Tap Project: World Water Week is March 22-28, and local restaurants will invite diners to donate $1 or more for the tap water they'd ordinarily drink for free. Visit www.tapproject.org to find out who's participating. Proceeds bring safe drinking water to children who often go without.

It was a two-day competition, and Williams says the club's executive chef Michael Hall was there to cheer him on. Even a night on “Iron Chef” doesn't entail this much effort. Congratulations, chef.