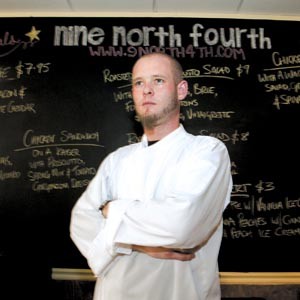 An evolution is happening at a small, midblock cafe called Nine North Fourth downtown. The place didn't last long as Tony's Deli, but it has a new owner and a chalkboard menu that's poised for a different level of interest. The sandwich list is gradually giving way to fig and prosciutto salad or pan-roasted chicken on warm potato and green bean salad, among a list of seasonal variations. The daily flatiron steak and chicken options likely will remain, because sometimes downtowners insist on those hearty comforts.

Weekend dinner service starts this month, says chef Phil Barradell, a Brit who's been in Richmond for five years after a career cooking in the United Kingdom's fancier country houses. His techniques haven't changed, but his venue and attitude have. “I think fine dining's dead, but that doesn't mean you can't cook at that level,” he says. “Food doesn't have to be fancy, but it has to be prepared with knowledge and passion.”

Barradell is getting noticed for his dedication to the work. Weekday breakfasts such as the healthy English — stone-ground, sharp-cheddar grits with shiitake mushrooms, roasted tomatoes and potatoes, eggs and Flour Garden toast are something different at $6.95. The cafe's atmosphere is a just shade above utilitarian so far, but changes are in the works to match the intentions of a food-lover's venture. “I don't think I can put down a footprint by selling onion rings,” he says. “I don't mean that to sound pretentious, but I don't want to be generic. I want to be exciting every day we're open.”

Barradell's secret weapon is his accent, which seems to make people take him more seriously, he notices. But it's his chops in the kitchen that will ultimately prevail, and here's a wager that they will. Breakfast weekdays from 7 a.m., lunch weekdays, dinner Friday and Saturday starting Oct. 15. 9 N. Fourth St. 644-8669. www.9north4th.com.

Beauty in Carytown
After almost two years of meticulous construction, the upstairs hideaway Xtra's CafAc is open above Bangles & Beads at 3322-B W. Cary St. This one has eye appeal, with a curving street-front balcony that seats a dozen, and an ample bar and cafe tables that hold another 80. Xtra Moore and team are offering a Mediterranean spread with West Coast influences, including a savory crA"me brA¯lAce served with garlic crostini, a mozzarella poutine with chicken gravy, hearty salads, house-made desserts and vegan, vegetarian and gluten-free options.

Xtra's bar holds 10 beers on tap, a wine list that's in the less-than-$10 range, and the cheerful house management of Maggie Robinson. Chef Chris Ahart, formerly of Mosaic CafAc, runs the kitchen, and Moore, a well-loved bartender in Richmond, brings her own following to the already-hopping business. Open daily from 11 a.m. until 2 a.m. 355-0446.

Conch Republic Rocketts coming
Quite a number of local owners and chefs have talked about starting a new restaurant at Rocketts Landing. Most of those projects fizzled, but now one's apparently got staying power. Bob Cox, owner of Metro Grill and Curbside CafAc, is getting a sweetheart deal to open Conch Republic Rocketts at the urban community next year. He'll operate the restaurant in a space the developer is building.

A ground-breaking for the hillside project just east of The Boathouse restaurant was set for this week. The building, designed by H&A Architects and Engineers, is a 6,000 square foot hillside contemporary with industrial elements. Its biggest feature is a 2,000 square foot deck looking over the James River and the boat slips at Rocketts, beckoning business from the water and the city.

The restaurant will seat about 220 people in a “fun, laid-back, very unpretentious, very casual Old Key West style cafAc and bar,” Cox says. Conch Republic is named after an uprising of Key West residents who seceded from the U.S. to protest heavy-handed border patrols in 1982. Now they celebrate independence day every April 23. Cox expects to celebrate here as well, once construction is finished.

Correction
In a recent Short Order, we mistakenly implied that Billy Bread, a local bakery, was being transferred from its current owners to its originator Billy Fallen. Billy Bread officially stopped production in mid-September. The South Allen Avenue bakery and building are now for sale by owners Karen Gibbons and David Achkio. Billy Fallen, who sold them Billy Bread in 2004, is now selling bread to some of their former customers. No agreement has been made for the use of the Billy Bread name.