Garnett's Cafe opens on a sentimental note, plus a new Currant at Rocketts landing, Bacchus at the Jefferson and more. 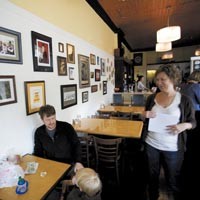 Garnett's CafAc opened last week, and already the retro-styled business is developing a fan base. That's because owners Kendra Feather and her brother, Curtis, are operating it. She owns Ipanema CafAc; he was a bartender at Avenue 805. It's also because they've spent all summer getting the cozy, old-fashioned cafAc decorated and ready. Open for coffee and pastries at 7 a.m. daily; sandwiches and light fare from 11 a.m.-10 p.m. Tuesdays through Sundays, closing an hour later on Fridays and Saturdays. The business is named after the owners' grandmother, who is 102 years old and lives in Phoenix. 2001 Park Ave. at Meadow Street. 367-7909.

Gaudi meets Short Pump: Now that Emilio's has opened its third location in Short Pump — and resolved the MapQuest issues that made it difficult for people to find the place — the tapas and paella joint is embracing its cheap date-loving clientele. Wednesdays at all locations, diners get a regular tapa, two entrees, a bottle of house wine and shared dessert for $50.
The bold interior at the new location is inspired by architect Antoni Gaudi, owners say, and the paella recipe is an international winner from Valencia, Spain.
Emilio's Tapas y Paella in Short Pump features happy hour and dinner daily, lunch Mondays through Saturdays, and a patio. 200 Town Center West Boulevard, No. 601, just west of Short Pump Mall. 360-8080. www.emiliosrichmond.com.

Currant at Rocketts: Zuppa won't be coming to Rocketts Landing after all. Instead, that former eatery's co-owner, Adam Schumm, will manage food and beverage operations for a different venture in the new urban community. The restaurant will be a full-service bistro called Currant, housing a coffee bar with pastries from local baker Favienne Roop, ice cream from Bev's, and an American menu with lunch and dinner hours, a bar and outdoor seating. Construction is under way for a planned fall opening.

The Grill at Libbie and Patterson: Coming soon from the owners of City Diner, a new cafAc to rival longtimer Phil's Continental Lounge a block south. Construction is in progress at 5724 Patterson Ave.  It's in the same location as the former Freckles cafe.

Later hours: The Arcade CafAc at Libbie and Grove avenues is open for dinner Wednesdays through Saturdays from 5-9 p.m. Daily specials, wine and beer, a 20-seat patio, value-driven appetizers and entrees include seafood, pastas and meatloaf, all served with dinner rolls and salad. Now that the Peking restaurant is closed, this adds a nearby dinner option for filmgoers at the Westhampton. The Arcade also serves breakfast and lunch daily except Sundays. 288-9439.

Feast for fall: Tastebuds American Bistro presents a wine-tasting dinner Oct. 26 at 7 p.m. featuring wines from Alsace, Germany and Austria. Chef Ryan Baldwin's smoked trout salad is paired with a Schumann-Nagler riesling, a charcuterie plate with country patAc and Westphalian ham is paired with an Adam cremant, wild mushroom ragout complements an Adam pinot blanc reserve, roasted pork tenderloin with caramelized shallots and cherries is served with a Neckenmarkt zwiegelt. and a dessert of pear strudel with aged gouda, blackberry caramel and Chantilly cream is balanced with an Adam gewA¬rztraminer reserve. $50 per person. Tax and gratuity are extra. Reservations are required at 261-6544 for this informal, communal, table-style event at North Side's culinary jewel. 4019 MacArthur Ave. www.tastebudsamericanbistro.com.

Bacchanalian spread: Here's something different: an interactive presentation exploring the history of wine, supplemented with appetizers, a three-course dinner, and of course some carefully chosen bottles. TJ's Restaurant at the Jefferson Hotel presents “Bacchus the Rascal, A Bacchanalian History of Wine Seen Through 4,000 Years of Art,” which it promises is a vibrant and humorous experience, shown at the National Press Club and among metropolitan culinary groups. Reservations are required for the Oct. 22 event, at 7 p.m., for $75 per guest. Contact Ben Eubanks, the Jefferson's director of restaurants and wine, at 649-4629. www.jeffersonhotel.com.

Have a tip about the Richmond restaurant scene? Send it to shortorder@styleweekly.com