Your tweets summon up mobile fusion food at the Boka Taco Truck. 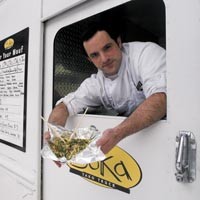 Driving Force
Cooking on a truck has “a certain mystical appeal,” chef Patrick Harris says, even if it also means crash courses in plumbing, electricity and carpentry to keep the truck kitchen running. He's left traditional restaurants to open Boka Tako Truck, which is coming via Twitter requests to neighborhoods all over town.

This is the city's first fusion-style, mobile food business that parks where summoned. Last week, workers near 10th and Cary streets tweeted a request. By lunchtime they were lining up to buy three styles of tacos — Asian, Mexican and American — to savor ingredients such as kimchi, beef bulgogi, guajillo-spiced pork, cilantro chicken, marinated tofu and chihuahua cheese.

Quite literally, “this is chef-driven food,” says Harris, formerly of Water Grill and Washington's Adour restaurant. He and former Dd33 chef Nicholas Davis “are making everything from scratch, every day, with attention to detail,” Harris says. “We're not prepurchasing anything.” Their menu will expand to include flautas, specials such as sautAced salmon tacos and other items with a local-foods emphasis by spring.

Boka Tako follows a foodie taco trend in Los Angeles, where the Kogi Korean barbecue truck is a huge hit. Harris is respectful of the local buzz for Nate's Taco Truck, a longtime Virginia Commonwealth University-area favorite with its own expansion plans. Boka Tako's mobility, in a 25-foot rig that looks like a white, converted UPS truck, makes it responsive and personalized, and already a small sensation. On Twitter: @bokatruck. www.bokatruck.com.

Check Please
The Culinary Trust, the philanthropic partner of the International Association of Culinary Professionals, is accepting scholarship applications for formal culinary education and independent study and research through March 1. There are 24 scholarships available with a value of nearly $150,000 for the 2010-2011 academic year. To apply visit theculinarytrust.org.