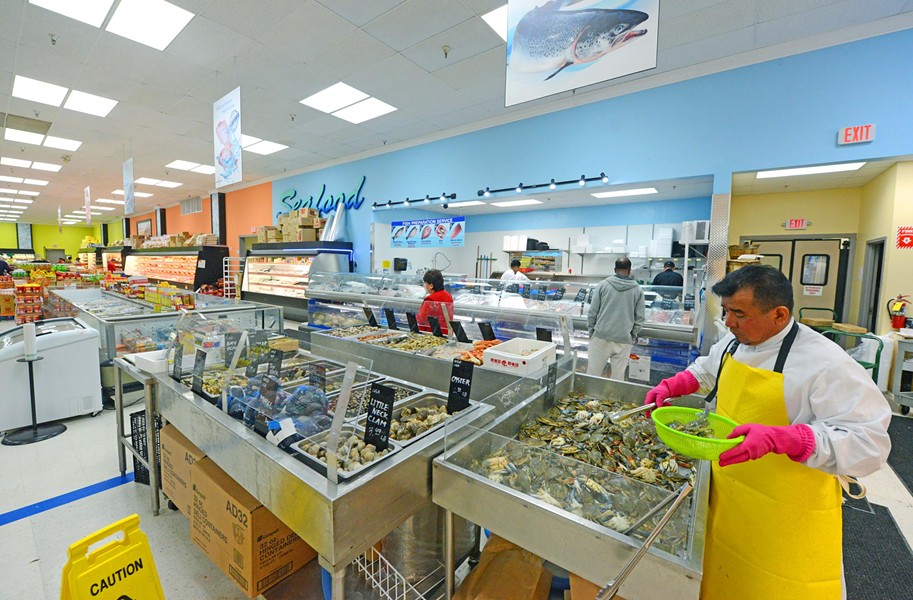 Scott Elmquist South Side’s New Grand Mart has an extensive seafood and produce selection, plus just about every other Asian and Latin American product you can think of.

When New York chefs visit Richmond, they’re uniformly impressed with Tan-A Market on West Broad Street. One of them is Rob Newton, chef and owner of both Wilma Jean and Nightingale 9, a Vietnamese restaurant in Brooklyn, who was here for last weekend’s Off-Broad Appétit. He says Asian ingredients are found piecemeal at different mom-and-pop shops throughout his city, but Richmond’s Tan-A brings everything under one roof, including hard-to-find greens such as saw tooth and Vietnamese mint.

And the game has heated up with the entry of New Grand Mart in Chippenham Square Shopping Center. During the last few years, Richmond has become an unexpectedly competitive landscape for grocery stores, with Kroger, Martin’s, Whole Foods, Fresh Market, Trader Joe’s, Food Lion, Aldi and the soon-to-open Wegmans clawing for any inch of the market they can grab.

Now the same can be said for ethnic markets.

New Grand Mart is part of chain owned by Northern Virginia company Green Paradise Enterprises, which bought two stores in 2013 from a larger company that owns a string of stores from Georgia to Washington named simply Grand Mart. (It’s confusing.) In addition to the store here, it’s opened another New Grand Mart in Maryland.

When you walk into the Midlothian location, a former Marshall’s, the size is mindboggling if you’re accustomed to smaller, cramped, overstuffed Asian markets. The produce section runs along the entire length of one side of the store and is filled with exotic finds — giant stinky durians, spiky Indian bitter melons, fuchsia and electric green dragon fruit and a bin of enormous fresh jackfruit.

Where else can you find filleted fresh shark for sale or a wide, low Plexiglass container where you can pluck out individual live blue crabs yourself?

The aisles are arranged roughly according to country of origin — Korea, China, Japan, Thailand and India primarily, although there’s a comprehensive row devoted to Latin American ingredients as well. You’ll also find an aisle full of necessities: Think toilet paper, dishwashing liquid and diapers. In the corner, Korean noodle and rice bowls are prepared, and the tables and chairs are full of parents, children and older people filling up after a long trek through the store.

New Grand Mart’s entry into the market reflects the changing demographic in this part of Chesterfield, as Style contributor Peter Galuska notes in a story for the Chesterfield Monthly. The influx of immigrants to the area and its accessibility to Chippenham Parkway make it a logical anchor to the stretch of Midlothian between Chippenham and Powhite, which has seen a wide range of businesses from hair salons to small specialty stores pop up, catering to customers who’ve come to Richmond from all over the world.

And it might just influence local chefs, who now have access to a wider range of ingredients that are even easier to find, to spice up tonight’s special.