Shoe Fetish: Artemis Gallery reaches out to artists to recycle shoes for an exhibit 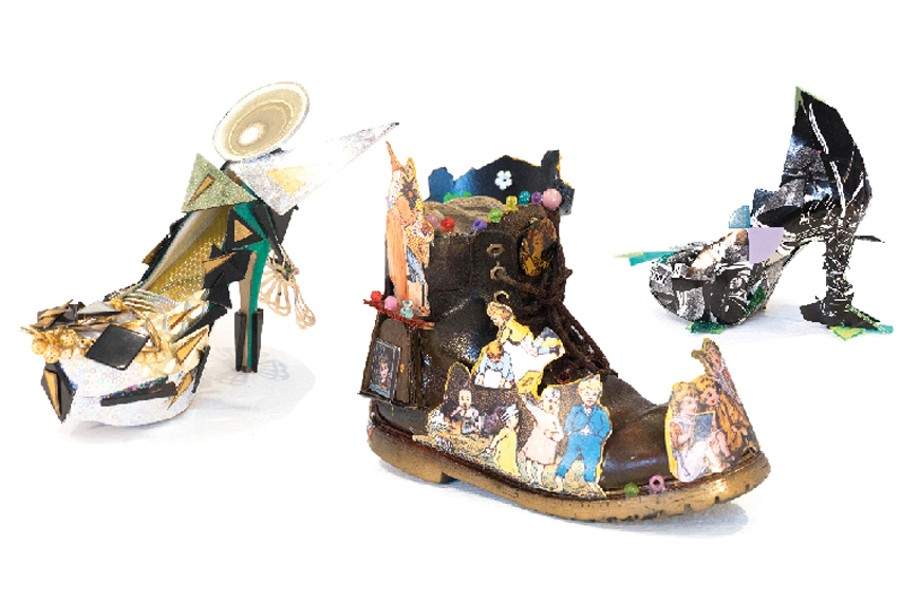 Marilyn Monroe said, "Give a girl the right shoes and she can conquer the world."

Give a group of artists the right shoes and the result is "Exoctica: Stilettos and Street," a new show of re-imagined footwear at Artemis Gallery.

Owner John Crutchfield has a tradition of doing workshop shows, inviting a diverse group of artists and would-be artists to participate in a day of creativity that results in an exhibit. In 2013, the medium was bras and corsets, in 2014, masquerade masks. Sunglasses were the starting point in 2015 and boots in 2016. After a year off, he was eager for another show.

"I got the idea from fashion shows in Europe where I saw the wildest shoes I'd ever seen," he recalls. It was enough to inspire him to scour antique shops in search of shoes to use as starting points for creating whimsical objects, although they sat unused for a year when he got busy with other projects. Finally, this summer, inspiration arrived.

Alice Anne Ellis' contribution, "Temple of the Foot" began life as a burgundy suede platform pump before she added ivy sprouting from the shoe and a wine glass from which tumble slips of paper with quotes. Leah Anderson's "Hermes, the Messenger" grew out of a low-top sneaker adorned with feathers, splashes of gold and pink and orange triangles of Plexiglas.

For Crutchfield, the workshops offer a means to utilize supplies he has on hand, items as varied as seashells, artificial flowers, clocks, crystals and fans. "I've been collecting materials for 25 to 30 years," he explains. "These workshops are a way to recycle and create something new from them."

To glean who might be interested in participating in the workshops, he sends out feelers on Facebook and Instagram, puts out the word to artists he knows and mentions the workshop to everyone who comes in the gallery. Despite the heat and vacations, when the call for artists went out in August, enough people showed up to create 18 shoes for the exhibit.

"Exoctica: Stilettos and Street" occupies a central location inside Artemis Gallery, an eclectic gallery space established on Main Street in 1997. Unlike most local galleries, which, according to Crutchfield, "focus on walls," Artemis features arts and crafts created by artists from all over the country. Funky and colorful, the gallery is home to things as varied as detailed pencil drawings of rock royalty such as the Who, the Stones, Led Zeppelin, mosaics, ceramics and hand-blown glass. In this catholic atmosphere, a shoe show makes perfect sense.

"There Was an Old Shoe Mother," crafted by Crutchfield and Charles Sharp, brings together an army boot with vintage cardboard cutouts of children popping up all over the boot and decorated with brightly colored plastic beads and shapes. "We even made a little door for Mother to come out from," he says, pointing to a flap on the boot's side.

Far more ethereal, "Starry Night USA" by Emily Saez features a boot painted an inky blue and covered in stars and sequins with a gold pipe cleaner for a shoelace.

The flamboyance of the gallery's arts and crafts, along with lower prices, tends to attract a younger audience. Often, he sees people drop in expecting to spend 10 minutes but getting lost in the gallery's fantasy world and wind up spending an hour or more.

"So many older people's houses are already full of art. Millennials can afford us, so we appeal to people with their first apartment or house who've just begun collecting."

For Crutchfield, the appeal is not just who comes to see the myriad objects in his gallery, but that the workshops for exhibits such as the high heel show attract a wide-ranging and different group of artists every time.