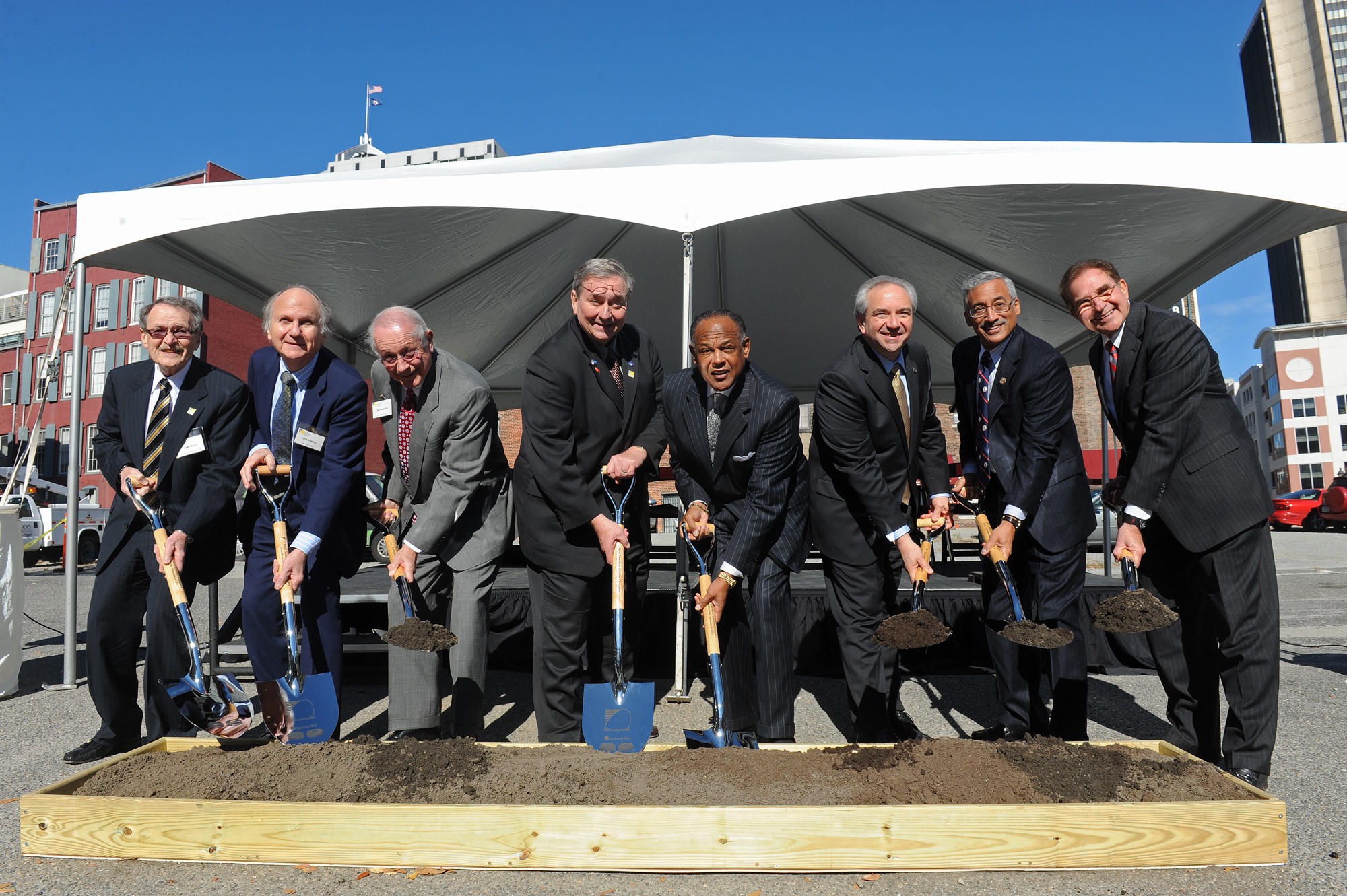 After almost 30 years of trying to build something, anything, to commemorate religious freedom, the First Freedom Center broke ground Thursday on two Marriott hotels.

The word “hotel” is barely uttered at the groundbreaking ceremony, however. The attending dignitaries instead praise the religious freedom-themed exhibit facility and conference space that will be part of the twin-Marriott complex at 14th and Cary streets in Shockoe Slip.

“I’ve always thought it odd, that at such a historic site that we’re standing on today, that we had a parking lot,” Lt. Gov. Bill Bolling says.

The site is where the Virginia legislature in 1786 passed the Virginia Statute for Religious Freedom, a law written by Thomas Jefferson that guaranteed religious freedom for all Virginians.

It’s a pretty big deal. Yet for almost two decades, the First Freedom Center has done nothing with the site, despite raising millions for various proposed monuments and education centers.

In July, the center sold the land to Apple Nine Hospitality Ownership (part of the Apple REITS) for $3 million. Over the next 18 months, an Apple-owned Marriott Residence Inn and Marriott Courtyard will rise there.

“This truly is hallowed ground,” says Glade Knight, chief executive of the Apple REITs and a First Freedom Center board member.

“I know that Jefferson would be very pleased,” Knight says. “In fact, I am positive of that. I had that feeling that he would like for me to tell you today … he just wanted you to know how thrilled he is to have his name associated with the Marriott brand.”

Not that hotel up the street, he jokes.

Ben Howerton, chair of the board of the First Freedom Center, thanks Apple REIT, Knight and Mayor Dwight Jones, “who assisted us with all the maneuvers -- not maneuvers,” he corrects himself, as the crowd laughs merrily -- “all of the activities associated with the clearance of this property for construction purposes.”

The project stumbled for years as city groups such as the Commission for Architectural Review questioned its merits and design. City Council finally approved it in July.

“I want to congratulate you for not giving up,” Jones says later, “or throwing in the towel of surrender, but standing strong so that we could have this wonderful celebration today.” The mayor says the multimillion-dollar project will lay a foundation for the revitalization of the Shockoe area.

The Council for America's First Freedom was formed in 1984 to honor the 1986 bicentennial of the Virginia Statute for Religious Freedom. After that celebration, the group decided to continue its mission of education and commemoration.

The council first proposed a conference center and park that would include a monument to religious freedom, envisioned as a three-sided pyramid shooting a colored beam of light skyward.

Didn’t happen. In 1993, a donor gave the council the historic site at 14th and Cary. But even with this gift, the council couldn’t make its big plans happen. Not the $9.5 million Center for the Virginia Statute for Religious Freedom. Not the $19 million, 300-foot-tall monument on an island in the James River. And not, most recently, a $25 million education center.

The site of staggering significance remained a parking lot. So after decades of fundraising -- including healthy infusions from the state -- and no progress on a physical facility, the organization, now called the First Freedom Center, came up with a solution. It sold the land to Apple REIT, which will own and manage the hotels and conference facility for profit and also include space for an education center.

“We will have a building that will be separated from, yet a part of, the entire facility,” says Tommy Baer, the center’s honorary board chair. “We thought that was important, so that the distinction remains.”