How different Richmond musicians survived and even thrived during the pandemic.

Scott Elmquist Singer-songwriter Erin Lunsford has stayed busy over the past year by streaming performances from her home.

Necessity is the mother of reinvention.

For singer-songwriter Erin Lunsford, who was about to release her long-in-the-works album “Damsel,” it meant taking her guitar to her couch.

“I wanted to stay connected and have people feel positive,” she recalls. From the start her folksy, powerfully sung performances were standouts for their professional polish. “Knowing how important light is for video, I dragged every lamp in the house into the room and took off the shades. It was super-bright.” But instead of an audience, she was smiling at the tiny lens in her laptop.

“You miss that energy you get from being with the people feeling the music,” Lunsford says. “But the comments online have been wonderful, sweet and generous.”

Starting March 17 last year, she had a show every week for four months, backing off to biweekly or monthly after. Each show benefitted a charity related to the pandemic. Over the month she added guests, using a click track to create the illusion that they were playing together live.

Where Lunsford retooled her approach for streaming, jazz drummer Scott Clark went deeper into the sonorities of his instrument.

“I have always been interested in solo percussion,” he says. “The big thing is the idea of space. To hit the cymbal and let it ring until it settles, to explore pitches on the roto toms. To just sit inside that sound and not feel the need to hurry.” His pandemic record, “This Darkness” on Out of Your Head Records, deconstructs a Rilke poem into a series of immersive movements. He’s cautiously optimistic about the future. Maybe not the short-term ability to fill a 500-seat theater with a dancing crowd, but booking some shows in reopened galleries. “Maybe this is the time that being an avant garde musician will pay off,” he says.

No BS Brass trombonist Bryan Hooten is also digging into the possibilities of what is not usually thought of as a solo instrument.

“When I am playing with a large group, I have a clearly defined role. Solo I have to embody them all,” he says. While there are techniques to add a harmonic dimension to a single note line, notably multiphonics or singing through the horn while playing, Hooten has discovered that silence contains its own music. “People fill in the blank spaces. You have to leave the listener some room to imagine what is happening.”

Waiting for things to reopen, he’s been teaching yoga online and working on the new No BS album, laying down his part in an isolation booth. Even in an ensemble, the pandemic process is solo.

Percussionist Giustino Riccio, known for his work in Bio Ritmo, was in Russia when the pandemic curtain came down. But after returning, lockdown at home with his wife, Richmond Symphony second violin chair Ellen Cockerham Riccio, had its own charms. “We’ve been pretty happy in a lot of ways,” he says. “We almost feel guilty admitting it.”

The time together has forged their first collaboration with the addition of his congas to her highly successful pandemic musician-for-hire offering, a Violinist in Your Garden.

“We have a full 45-minute set, doing everything from Cuban danzon to 14th-century Italian music,” he says. At first, Riccio admits he was a bit intimidated. She is academy-polished and he doesn’t even read music. But it turned out to be no serious impediment. “It is a beautiful new thing,” he says. And studying the ancient music had another lesson: “It was the plague times that led to the Renaissance,” he says on a positive note.

Longtime Mekong Express bassist Todd Herrington was on the road during the second night of a sold-out tour with a supergroup featuring Grammy-winning guitar phenomenon Billy Strings when he got the news. Over that two-and-a-half-hour drive, the situation changed from “pack hand sanitizer” to “everything is canceled – catch a redeye home because there may be no flights tomorrow.” It was a real yank-you-by-the-collar moment, he says. 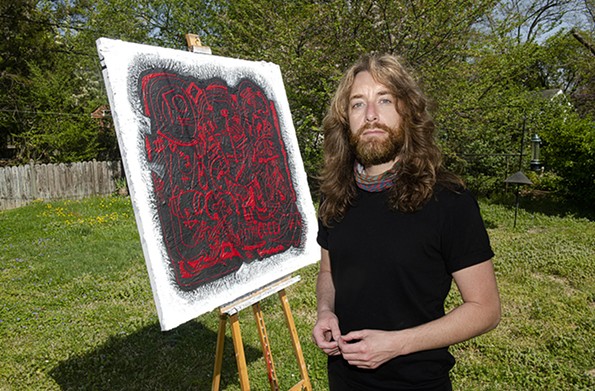 But he adjusted. Herrington’s first move was into production, getting his home studio up and running, People would send him phone videos, he would add drums and bass and edit together a video. “I was having fun with my friends and honing my skills,” Herrington says. “But then, honestly, all this stuff with George Floyd happened. I felt like I was putting out videos while the world was burning” and he didn’t want to do anything “that felt self-serving.”

So he started “The Paint Sesh,” a video podcast featuring Herrington in his backyard with an easel and a grab bag of musician guests. There have been 27 episodes to date that have included saxophonist Karl Denson, drummer Corey Fonville and trumpeter Jennifer Hartswick, who plays with Trey Anastasio. As much an open-ended hang as a show, it’s as charming, specific, and abstract as the painting that Virginia Commonwealth University arts grad Herrington is composing.

And, in a more universal bit of creativity, after a decade together, Herrington and wife April just had their first child. “We always thought we couldn’t have children,” he says.

Normally touring, now he is in town for those first dizzying weeks of development.

“I would have missed a lot if I was playing 200 shows a year,” he says. “I am deeply appreciative that I can be here.”

It’s another shining consolation in a dark, but gradually brightening time.