Recontextualizing Richmond’s projections are casting the Confederacy in a new light. 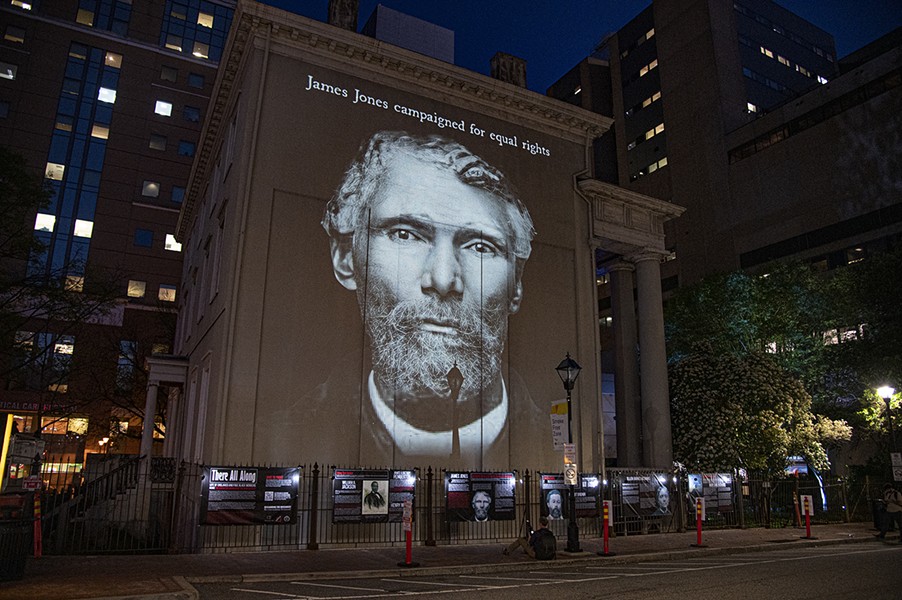 Scott Elmquist The image of James Jones projected during the spring Recontextualizing Richmond project at the White House of the Confederacy.

On a warm night this spring, larger than life Black faces dominated the façade of the White House of the Confederacy. The sight wasn’t (just) the thing of nightmares for racists and segregationists—it was the culmination of nearly two years of activism on behalf of Reclaiming the Monument, a collective that reframes historic spaces using technology.

Titled “There All Along: the hidden Black lives inside the White House of the Confederacy,” the installation projecting pictures of former slaves and domestic workers onto the one-time residence of Confederate president Jefferson Davis was the first in a series of six planned by Recontextualizing Richmond, a partnership between the Valentine Museum and Reclaiming the Monument. After the racial uprisings of 2020, the Andrew Mellon Foundation announced $250 million in funding to address America’s landscape of historical memory and monuments. Recontextualizing Richmond received $670,000 to tackle the Lost Cause in Virginia’s capital.

Now part of the American Civil War Museum alongside the site of Tredegar Iron Works, the White House of the Confederacy was long little more than, at best, a destination for history buffs and, at worst, a pilgrimage site for “the South will rise again” enthusiasts. The figures Recontextualizing Richmond projected onto the building seek to tell a fuller, more honest history.

“These extraordinary people who worked here were hidden behind the iron curtain of the Confederacy for so long,” says Alex Criqui, creative director of Recontextualizing Richmond. “So many of these lives are seen as just slaves in this place where all this history was happening, but they went on to make their own history. They actually campaigned and worked for civil rights.”

For example, James Jones founded the first Black fire department in North Carolina and during Reconstruction helped reform the state constitution to be a more inclusive document in 1868. While serving as Jefferson Davis’ personal coachman, William A. Jackson passed vital information to the Union about Confederate military deployments, supply problems, and planning.

Everyone projected onto the building was once enslaved there save for Mary Jane Richards, a free Black who returned south in order to infiltrate the rebel senate and the White House of the Confederacy as a hired domestic servant. Lacking a preserved photograph of her, Recontextualizing Richmond hired Miguel Carter Fisher, an arts professor at VSU, to recreate her likeness based on historical accounts of her appearance.

The resulting painting is more than just a projection; today it hangs in the lobby of the Valentine as the first face there for all to see. As to why the collective chose Richards to highlight: “Hers is the story of somebody who existed in two worlds in Richmond,” explains Criqui. “She was a free woman but still restricted by the hierarchy of slavery. She showed real courage in the face of physical violence and oppression.”

Those excited to see what Richmond site will be recontextualized next needn’t wait long. The second installation is set to debut on Belle Isle, July 8, with projections on display that Friday, Saturday, and Sunday after sunset. As yet untitled, this projection will explore the converging histories of our riverfront ranging from the indigenous era to Black life and labor, as well as the prisoner of war camps that dominated the site during the Civil War.

To bring this reframing of the past to life, Recontextualizing Richmond has brought on three local artists: Ethan Brown, a prodigious Pamunkey painter; Austin Miles, a muralist renown for her depictions of Black women; and Todd Raviota, a filmmaker and instructor at the Maggie Walker Governor’s School.

Beyond the Belle Isle installation, four more exhibitions of the power of light to reframe history will be on display around town before the year is over. A collaboration with Untold RVA will take shape later this summer. The Shockoe Bottom burial grounds should witness an event during Gabriel Week—a seven day celebration of an enslaved Richmonder who led an uprising in 1800 to free thousands.

To make the series of projects as inclusive as possible, Recontextualizing Richmond just closed a call for collaborators through which four people or groups will receive $5,000 grants to realize their own public art ideas. With both video and audio additions as possibilities, Criqui is certain whatever new partners they select will only expand the mission and mediums at play.

“Light is a powerful, peaceful and evocative medium,” he says. “It’s engaging to us innately as animals. It’s not destructive; it’s uplifting. This series is about shining a light on the history of our city that has been blocked out by the narrative of the Lost Cause.”