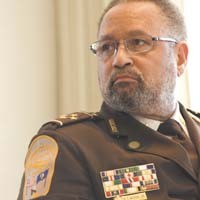 At its 2006 peak, medication cost the jail more than $1 million. In 2007, Woody reduced that to less than $715,000. Figures for 2008 show total medication expenses at the jail were $203,000. Each fiscal year's total accounts for all drugs — from aspirin to AIDS medication — purchased and dispensed by the Richmond Jail.

The mysteriously evaporating medicine cabinet at the city jail has led some people to question whether any inmates are being denied needed medications. Five inmates died at the jail last year, and two of those deaths were AIDS-related.

William Rhoades, a psychologist at the jail who retired in January 2008, says Woody instituted a new policy “that if the HIV people weren't taking their meds in the street, we weren't going to start them here.”

By comparison, Henrico County Sheriff's Office spent more on AIDS and mental health drugs — $415,000 — in 2008 than the Richmond jail spent on all medications for the entire year. Henrico's two jails house approximately 1,100 inmates, compared with approximately 1,500 inmates in Richmond.

The closest area jail in terms of yearly spending to Richmond is in Chesterfield County, where spending for medication was $120,033 — for fewer than 350 inmates.

A 2002 United Nations report on AIDS and HIV put the average cost of a triple-cocktail of anti-retroviral drugs in the United States at between $10,000 and $12,000 per patient, per year.

Of the five deaths at the jail last year, the state medical examiner's office confirms that two of the inmates had HIV and died of AIDS-related illnesses. In a third, two independent medical professionals tell Style the official reported cause of death was a common AIDS-related illness.

“I am extremely proud of the management practices and cost-saving efforts made by the personnel assigned to our Medical Unit over the last few years,” Woody said in the statement. “At no time did the reduction in spending have an impact on the quality of care provided to jail residents by our Medical Staff.”