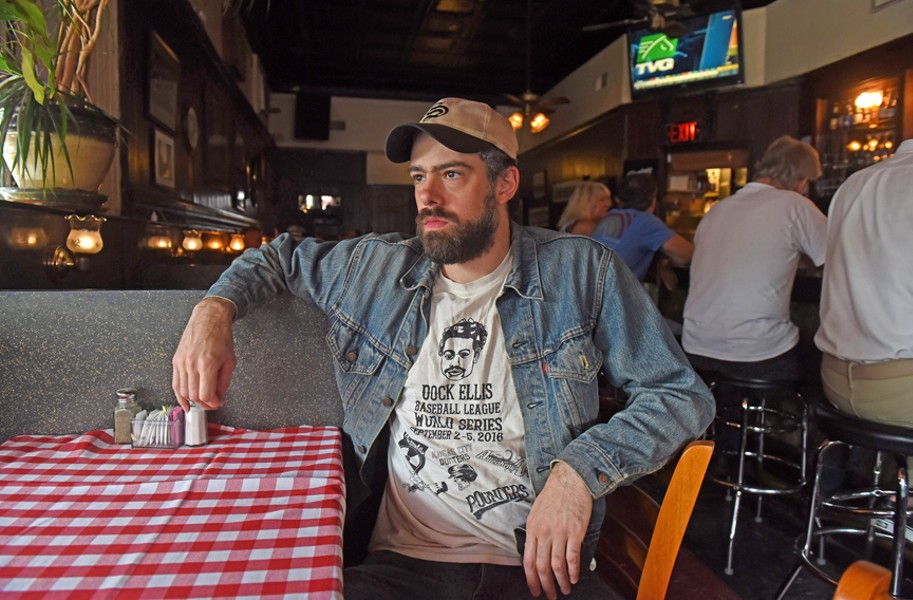 Scott Elmquist Singer and songwriter Benjamin Shepherd, shown sitting in Bamboo Café, was born in Nashville and moved to Richmond at 18. He’ll have an album release show on Friday, May 10, at Capital Ale House’s Richmond Music Hall.

Let's clear something up. Ben Shepherd is not the bassist for Soundgarden. Same spelling, very different sound. This Ben Shepherd is a rising anti-folk hero comfortably making music in the River City after bouncing between here and New York for the past few years.

"I'm extremely lazy, that might come through though," he says. "Maybe I should say I'm just a slow worker. It takes me forever to do things."

It's been a minute since the Nashville-born songwriter released his last full-length, "Eleven for the Road," a stripped down live recording done in one-take at Montrose Recording in 2014 with friends Charlie Glenn (the Trillions and Thao and the Get Down Stay Down) and Adrian Olsen (Avers). "I don't know if Adrian knows what a paradise he's got there. It's just beautiful," Shepherd says.

On May 10, he delivers "Hold the Line," a solid collection of eight songs finely aged over the past two years that mark the exponential growth of an artist. Lush arrangements, swanky guitars and hearty vocals flourish in 30 glorious minutes reminiscent of a young John Prine or Neil Young.

He teamed up with the aforementioned Montrose crew and Tyler Williams (the Head and the Heart) over a weekend in 2017 and casually cranked it out.

"The idea of working with Ben was always a little thunderstorm in the back of my mind that wouldn't quiet down," says Williams, who first heard him play at a friend's house. "I was blown away by his lyricism and the magnetic deadpan delivery. I'm proud of this record and I'm proud of Ben for writing so vulnerably."

Shepherd is an unfussy character, more interested in talking about dive bars (he recommends the Dugout for country karaoke) and his co-ed baseball league, the Richmond Scrappers, than waxing poetic about music. To him, it's about keeping it simple.

"I don't write regularly, I just wait until I have an idea. The more I play though, ideas start to flicker. For me, it's music first and then words. Figure out what those even mean later. Just let your brain wander," he says. "The songs that really stick with me aren't like hearing something crazy or striking. More like hearing my own thoughts confirmed by someone else."

Playing in New York had a big impact on the songwriter. It was at the epicenter of the anti-folk scene where he came to admire the work of players like Barry Bliss, Diane Kluck and Jeffrey Lewis. Some of the more familiar names to emerge from the same scene include Beck, Regina Spektor and the Moldy Peaches. There's one thing that holds true for these artists that Shepherd is quick to call out.

"These are people who are lyricists first and foremost. They may be strident singers and not be accomplished players per se, but lyrically it ranges from very on-point to the absurd. It's about content, the performance doesn't really matter" he says.

That said, this guy also digs those who are less substance and more fun.

"I love rock 'n' roll and I love songwriting. But I mean, I like candy rock 'n' roll and pop too. The Ramones are pretty dumb, but that first record was perfect. And I really like Kesha too," he says with a laugh.

Shepherd plans to tour later this fall since his baseball league and day job as a Fan property manager keep him pretty busy during the summer.

"It could be a full band, maybe just me and my musical partner, buddy Kevin Guild, and our stuff in a sedan."

For now, he'll savor the fruits of a few years labor with some local shows and has some deep love and sage advice for Richmond musicians.

"This place is unconditionally supportive," he says. "But people might need to be a little bit harder on each other. That's a catalyst for growth. Compared to New York, they'll tell you if you suck. Doesn't always feel good to hear it, but sends you back to work harder. I crave that."

Ben Shepherd plays his album release show with Piranha Rama and the Trillions on Friday, May 10, at Richmond Music Hall. Doors open at 7 p.m. the show starts at 8 p.m. Tickets for the all-ages show cost $7-$9.