Shelter from the Storm

Will responses from shelters, landlords and service providers be enough to protect the vulnerable homeless population during a global pandemic? 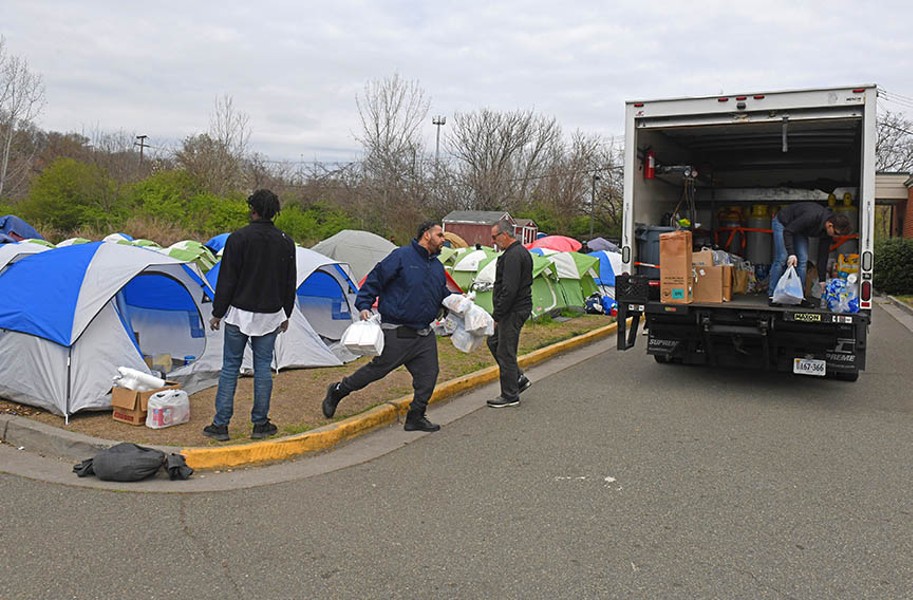 That is how Karen Stanley, president and chief executive of Caritas shelter services, describes COVID-19 and the pressure on care providers to keep pace with supply, staffing and space needs to provide shelter to the homeless, a population vulnerable even during ordinary times.

Caritas is one of a coalition of shelters in the Greater Richmond Continuum of Care, a long-term planning and crisis response group serving area homeless people. Under the guidance of Patricia Cook, chief medical officer of Daily Planet Health Services, area shelters have instituted a screening process that includes a symptom questionnaire and temperature checks for those presenting symptoms.

But Stanley and other providers have expressed worries about a thermometer shortage. As of March 18, Kelly King Horne, executive director of Homeward, the continuum’s lead coordinating agency, said screening “was not fully in place.” King Horne noted that in addition to the usual “wipes, etc. thermometers are in high demand.”

The virus is particularly dangerous for the homeless population, which in addition to lacking health care and the ability to quarantine, has a higher rate of respiratory disease according to a recent study, a major risk factor for COVID-19 patients.

As of March 18, screening “for COVID-19 at the door” is inconsistent at shelters statewide, says Nichele Carver, associate director of homeless and special needs housing for the Virginia Department of Housing and Community Development.

“Some have said yes, some are following Department of Health screening guidelines and others are saying, not yet,” she says. “Things are changing hourly.”

Staffing shortages at Richmond area year-round shelters, which serve about 330 people, are an increasing concern, Horne says. Richmond shelters are following federal Department of Housing and Urban Development guidelines for increased sanitization to prevent disease spread. Beds are spaced farther apart and shelters are creating areas for residents to self-isolate. State health officials also advise shelters to limit the number of people congregating in one room. As it becomes clearer that area hospital resources will be taxed, Richmond shelters are creating “comfortable spaces for people to recover” if they are infected, King Horne says.

Maintaining public health during a pandemic is “a balance between making sure we continue essential services like homeless shelters, while taking measures to limit disease spread,” says Laurie Forlano, The Virginia Department of Health’s deputy commissioner of population health.

State health and human services officials are just beginning to dig into the funding challenges of Virginia shelters. And while Virginia has joined other states in temporarily freezing eviction proceedings, coming a single missed payment closer to homelessness is still a real fear as much of economic life across the country is abruptly halted.

Service providers lauded the move as potentially life-saving. The Homeward coalition-led effort spelled the end of the camp as Richmond city trucks removed the empty tents after the people who lived in them were placed in hotels.

Some posters online criticized the effort as being pre-planned by the city to clear the camp from a Virginia Commonwealth University-planned parcel, regardless of any dangers posed by the virus.

“To witness [the camp residents’] pain and distress while city workers rolled in to discard their only possessions broke my heart,” Gray says. “We have to come together as a city a and society to protect our most vulnerable citizens and provide the compassion and care to help them.”

Providers in cities across the country have used hotel placements as a temporary measure to get the homeless off the street amid the pandemic.

“We started [last] Monday,” King Horne says. “Eighty people in four days is amazing.” She adds that meals were provided for those in the hotel “through a network of volunteers and community organizations.”

But hotel stays last only 14 days, which has former camp residents wondering what they will do next. King Horne says that service providers will return the “focus to helping people connect to services and housing” following temporary placement efforts.

Blessing Warriors, a faith-based organization that served Camp Cathy, has criticized city officials for offering what the group referred to as little and delayed support for maintaining appropriate hand-washing practices at the camp. Volunteers set up hand-washing stations and their own protocols for maintaining quarantine outdoors.

“They’ve had five months … to try to place them, and then, suddenly in a pandemic, they have enough money to get these people in temporary housing,” says Traci Byrd-Eagles, a Blessing Warriors Board member. “Two weeks in a hotel could have gone to [permanent] housing and other resources.”

Nationally, shelters are combating COVID-19 by moving federal funding from other line items. And the Department of Housing and Urban Development says it’s giving communities more discretion on how to apply its grants to health and homeless service efforts during the crisis. But it’s unclear when U.S. shelters could receive additional funding as Congress and President Donald Trump’s administration continue to negotiate the scope of financial protections.

The Virginia Department of Housing and Community Development is currently working with shelters to reallocate their existing state and federal funding, which it distributes, to address these issues.

“One of the questions we ask [shelters] is do they foresee any immediate gaps. ... Do you have a dollar amount we can move around within the funding they have?” the department’s Carver says.

“We partnered with communities on a daily basis before the pandemic,” says Pam Kestner, the department’s deputy director of housing. “[But] never has partnering and coordinating resources been more important than now.”

The first- and fourth-largest apartment leasing companies in Richmond are taking a watch-and-wait approach when it comes to breaks on rent payments for families impacted by COVID-19. Leaders at both companies say that the degree of financial assistance received by families under the aid package approved by Trump would factor in their decision whether to pursue eviction proceedings.

In response to the pandemic, the Supreme Court of Virginia suspended all nonemergency state court proceedings, including new evictions, from March 16 through April 6.

Considering court closures and federal funding questions, there are currently too many unknowns to make a decision on a company policy to halt evictions during the COVID-19, says Steven Boyce, senior vice president of S.L. Nusbaum Reality Co. The company is the fourth-largest apartment owner in Richmond, according to 2017 Yardi Matrix data, which listed a portfolio of 20 communities in Norfolk, Virginia Beach and Chesapeake.

Representatives at Breeden Co., the largest multifamily property owner in Richmond with 33 properties, cited the company’s precedent of waiving late fees for federal workers impacted by the government shutdown in 2013, and noted that it may do so again if necessary for families impacted by the coronavirus.

“We don’t know what the federal bailout is going to look like [and] we don’t know how quickly checks are going to get into individuals’ hands,” Faulkner says. “But, it’s to their benefit and our benefit, to support our current residents who have been loyal.”

It’s increasingly evident that as the economic and health toll of COVID-19 grows, homeless people and those at risk of losing shelter will face frightening challenges.

211 Virginia
Call for assistance with utilities, rent or mortgage and other human and social services.

Homeward
Effective screening and sanitation at area shelters requires supplies. To donate to the effort, send a note to Michael Rogers, director of mission advancement at Homeward, for a list of needs and drop off instructions. mrogers@homewardva.org.