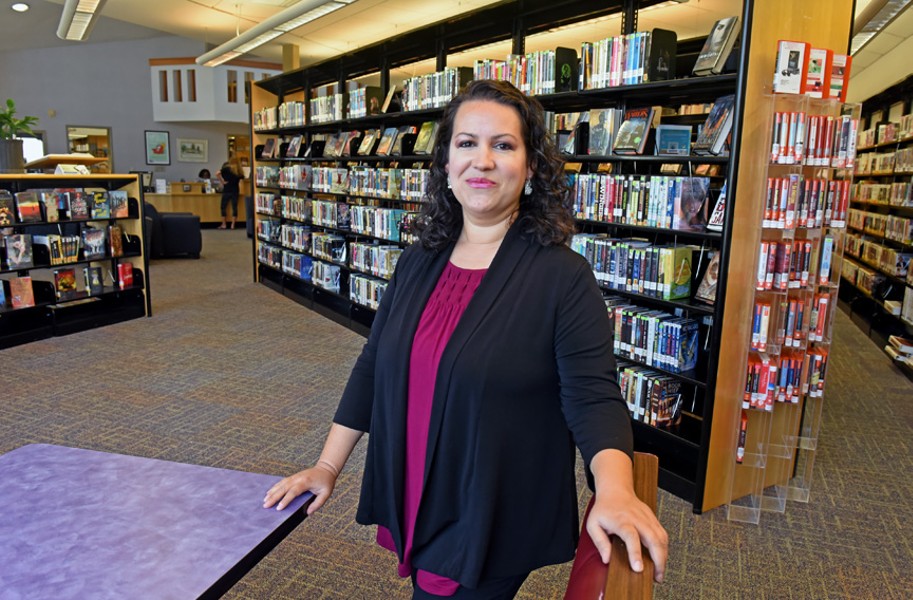 Only 4 percent of librarians identify themselves as Hispanic or Latino, according to the American Library Association. And as the only Sandston librarian who speaks Spanish, Cristina Dominguez Ramirez has become a familiar figure to many of the library’s Hispanic patrons.

“They know,” she says. “They’re like, ‘Where’s Cristina?’” She’s not difficult to find — just look for the Don Quixote tattoo on her right arm.

Ramirez came to Richmond to work as an academic librarian at Virginia Commonwealth University, but she discovered that she longed to work with patrons face-to-face. She became community services manager at Richmond’s Broad Rock branch, and in February became branch manager of Henrico County’s Sandston library.

Style: Tell me what it’s like working in Sandston.

Ramirez: It was a library built in a house, and became the cornerstone of the system that is now Henrico County Public Libraries. It’s actually one of the few libraries that you can walk up to, because we are in a neighborhood. So you do have the traditional community that’s been there for a long time, that grew up there around the airport and eastern Henrico. But I’m also seeing a lot of newcomers. I’m seeing people that constantly surprise me. … eastern Henrico’s changing. It’s growing, and I think it’s becoming more diverse.

Is it hard to find enough books in Spanish and other languages, or with diverse protagonists?

I think it has been. ... Librarians know it, because when they try to buy or try to order these books, those titles maybe aren’t available, or those books haven’t been published. … That’s why [Richmond author] Meg Medina and a lot of other people have been making [the We Need Diverse Books campaign] — to build awareness that we have to create a pipeline for these resources. They don’t just appear out of thin air.

If you could snap your fingers and have writers, editors and publishers start delivering more diverse books, what would you like to see?

For adults that are working on developing themselves professionally, or trying to enter into the work force, I really want to find books for them that help them with certain skill sets, whether they’re technology skill sets, whether they’re English as a second language, whether they are helping their children; if they’re immigrants, through navigating the U.S. school system, navigating health care. A lot of those how-tos when you’re new to this country and you’re new to this community.

On the other hand, I’m interested in things that are fun, that are going to hook people into reading and that are not going to feel like a chore. You’ve got a lot of popular titles, but they’re not being translated into different languages.

You recently returned from the International Federation of Library Associations and Institutions’ conference, which brings librarians together from 140 countries. What did you learn?

Around the world, one of the biggest issues that I heard coming up was the issue of communities on the move — whether it’s refugees, immigrants, newcomers. That is really what most libraries are grappling with. How do we offer services? How do we better reach out to them? How do we get their kids in here, to get them help with literacy, help with school projects? How do we help the adults integrate into the community?

Some of them are visualizing their role as not just community centers and resource centers, but they’re actually taking a step further. They want to be the incubators for small businesses for some of these immigrants. To help them get a leg up — and not just get a job, but how do they create their own business and then become employers themselves?

When the $28 million Varina library opened in June, some observers asked: “Why is the county sinking so much money into this fancy building? Aren’t libraries obsolete?”

Have you set foot in a library in the last few years? That’s the first thing I’ll tell them. And I say, if you haven’t, you really need to. Because you’ll realize it’s not what you grew up with. It’s not what your parents grew up with. It is a community center. It is a resource in the community, and in some cases it is the place for the community to go and congregate, have meetings, do workshops, presentations, home-schooling. Just the types of services we offer, I think, wouldn’t have been imagined 10 years ago.

Where else can you go and take a free class on digital literacy, or on making a 3-D model, or having a cooking class, or having your child play with this new resource? Where else are you going to get that, all for free? And from professionals? Have you met the staff? Have you seen how amazing they are? S