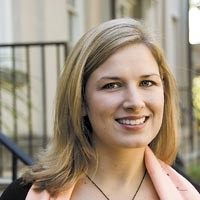 Sheila Sheppard grew up south of Cape Charles, a beautiful rural area right on the Chesapeake Bay. Experiencing that natural splendor had a lasting effect, and helped her realize that it was up to the next generation to preserve it.

Two years ago, Sheppard moved to Richmond and took a job with the nonprofit advocacy group Partnership for Smarter Growth. She views her job mostly as a translator and educator for community growth issues.

“We've lost the art of creating towns and places,” says Sheppard, a Church Hill resident who walks to work.

While it's easy to spur bursts of community involvement, sustaining it is another thing altogether. “Involve people early and they will be with you, involve them late and they will be against you,” she says, adding that her biggest challenge is keeping up the enthusiasm of people who often don't see immediate gains, as well as listening and “responding to the citizen voice ourselves.”

Sheppard is the only staff person at the partnership and her dedicated hard work is paying off, seeming to have energized the effort and lift its visibility: In one year, the group has acquired its own office and grown its membership exponentially. She's already worked with veterans such as Rachel Flynn and gathered a thousand signatures in support of the Downtown Master Plan.

She also teaches music and plays violin for a “jazzy prohibition blues” band called Stump Hole Water.  But her proudest achievement, she says, is watching new community leaders, such as those she helped cultivate at Envision Henrico, who go on to carry the flag themselves.