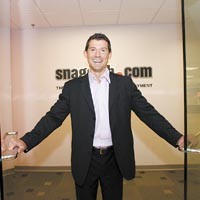 Shawn Boyer arrived a bit late to the dot-com boom. By the time he launched Snagajob.com in 2000, an online job board for hourly and part-time employment, just before the money dried up and the Internet bubble had burst.

“We were very fortunate with regard to the financing,” he says, having raised most of his start-up capital before Wall Street discovered that investing in stocks with imaginary profits was a bad idea. He and his partners moved into a 1,200-square-foot office in Williamsburg, and had to scrimp those first few months.

“Looking back, in the early days we didn't know if we were going to make it,” he says. “It made us be super lean, and hopefully made us a little smarter.”

Boyer had found an unscratched niche. Full-time Internet job boards such as Monster.com had already arrived, but there was nothing for hourly, part-time and contract workers, who represents 60 percent of the country's work force.

An attorney by trade, Boyer took a gamble that paid off. In 2001 he moved the business to Richmond, and then to Innsbrook in 2006. It now employs about 120. During the last five years, Snagajob's revenues have grown an average of 83 percent a year. The recession has hurt, though, slowing growth to 30 percent in 2009, he says. (Boyer declines to release revenues, saying only that they're more than $20 million and less than $100 million.)

In a city in dire need of a corporate pick-me-up, Snagajob just might be it. Boyer was named Small Business Person of the Year by the Small Business Administration in 2008. He also serves on the local boards of the Metropolitan Richmond Sports Backers, Comfort Zone Camp and the Greater Richmond Chamber.