The owner of Ruby Scoops is building a frozen treats empire with a new sno-ball shop in Jackson Ward. 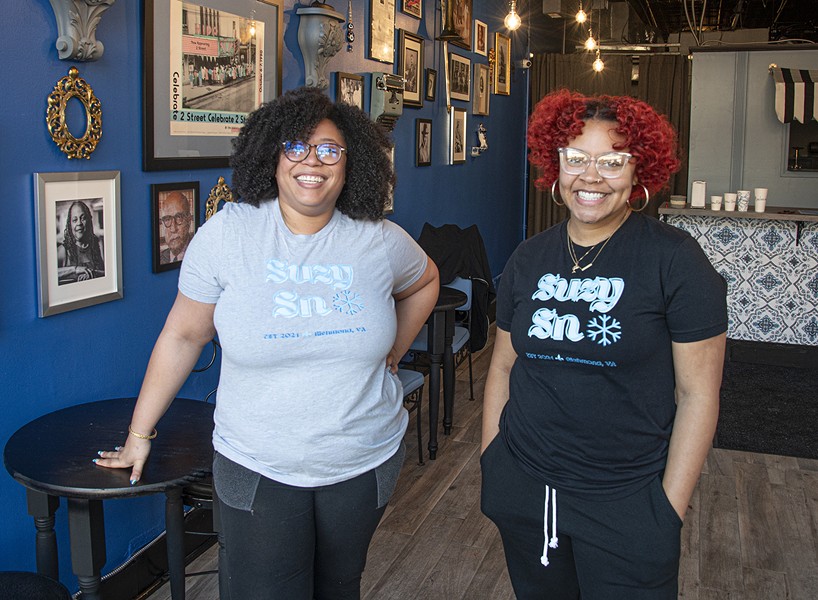 Hot off her big win in "Ben & Jerry’s Clash of the Cones" competition on the Food Network, Rabia Kamara is ready to debut the second outpost of her growing frozen treats empire: Suzy Sno.

The New Orleans-style, sno-ball shop in Jackson Ward opened to great fanfare last month as Kamara and her team tested their new concept ahead of a grand opening planned to coincide with the Richmond Black Restaurant Experience in early March. Offering flavors and toppings ranging from toasted marshmallow fluff to lime juice Tajín, her shop will make you forget everything you thought you knew about shaved ice.

“Sno-balls are snow cones’ much cooler cousins," says Kamara, a VCU-alum who first gained notice with her popular ice-cream shop, Ruby Scoops. “[But] instead of weird, chunky ice where all the syrup sinks to the bottom, our ice gets shaved so finely that it basically becomes snow." Because the ice is finer, the flavoring gets immediately absorbed "so no bite is grossly sweet." As it melts, it gets better because the flavors meld together at the bottom, she adds. 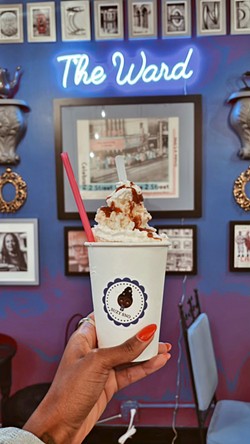 Bringing a passion to shaved ice that only a nationally renowned dessert diva could, Kamara is pushing sno-balls to new heights. One of the breakout stars on the menu is the Spicy Mango Margarita sno-ball, a half-habanero, half-mango mix with activated charcoal and lime juice Tajín topped with a gummy skull. Another top seller is the Gimme S’More, a chocolate sno-ball decked out with graham cracker crumbs, chocolate sauce, chocolate-covered s’mores bites and toasted marshmallow fluff from Karmalita’s Marshmallows & Confections. For those worried that such creative concoctions are beyond their comfort zone, classics like cherry, orange, and 14 other accessible flavors await.

“With shaved ice, there is a little bit of something for everyone because it’s basically gluten-free and vegan across the board; not to mention we have some sugar-free flavors to accommodate folks,” Kamara says, adding that their sno-balls are affordable because the ingredients are cheaper than ice cream.

After years running Ruby Scoops solo before launching a brick-and-mortar on Brookland Park Boulevard last year, Kamara is starting this time with a full bench of partners. Husband-and-wife duo Tiara and Kris Russell have joined Kamara and her long-time boyfriend, Bakari Ruggiero, as co-owners. While Kamara will be the face of the new shop, her partners have taken on everything from supply chain logistics to shop design, which made the soft openings last month feel seamless.

"There’s something nostalgic about eating something and your whole mouth and tongue turning red, purple, or blue. It’s important to have those small moments of joy, especially these days.” -- Rabia Kamara, owner of Ruby Scoops and co-owner of Suzy Sno tweet this

Inside Suzy Sno, dozens of gold-framed photographs pay homage to the history of the Harlem of the South. As a founding member of the Jackson Ward Collective, Kamara’s focus on centering the neighborhood’s Black heritage should surprise no one.

“A large part of me wanting to move back to Richmond was wanting to be intentional about being in a space that not only loves local businesses but truly loves local businesses of color,” she explains. “Richmond is changing at an extremely rapid pace, and it’s important to let everyone in a Black neighborhood know that you're there for them." She adds that there’s a line to ride between contributing to the community and not overriding residents’ vision for their home, "but why should we not have nice things in Black neighborhoods?”

When Kamara speaks hopefully about her new venture becoming an anchor of investment in an area that has been systematically divided, destroyed and disinvested for decades, her vision goes far beyond spruced up storefronts. She believes that good local businesses also give back. 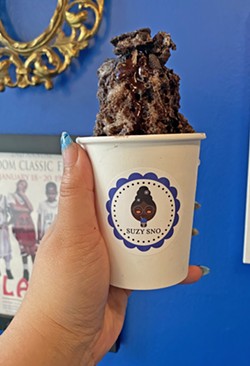 “One of the nice things about shaved ice is that there is such little room for user error,” Kamara points out. “I wanted to open a business that high schoolers can work at, to show kids all the different things that they are capable of." Making ice cream is more technical and complicated, she continues, so there hasn't been "the same opportunity to pour back into the community with [Ruby] Scoops.”

Work should not only pay the bills, but grow the employees' confidence to pursue their dreams, a belief which Kamara says is a testament to the shop's namesake: Her grandmother, Suzanne.

“She worked really hard to find a job that would get her a visa to America and bring our whole family here,” she explains. “If it weren’t for her, I wouldn’t be here. She encouraged me to cook and bake and find ways to make myself and my parents happy. She was the one person who gave me the grace to say, ‘This isn’t what I want for myself,’ and to buck my parents’ vision of the American dream and pursue ice cream.”

And now, Suzy Sno represents Kamara’s culinary wish to create new, heart-warming memories without forgetting good times past. To be a curator of nostalgia.

“There’s something nostalgic about eating something and your whole mouth and tongue turning red, purple, or blue. It’s important to have those small moments of joy, especially these days. If I can brighten someone’s day with a sno-ball, then I feel like I am fulfilling my mission in life.”