From Benedictine to the fashion runway, Stephen Adkins is using his modeling career to help RVA Fashion Week. 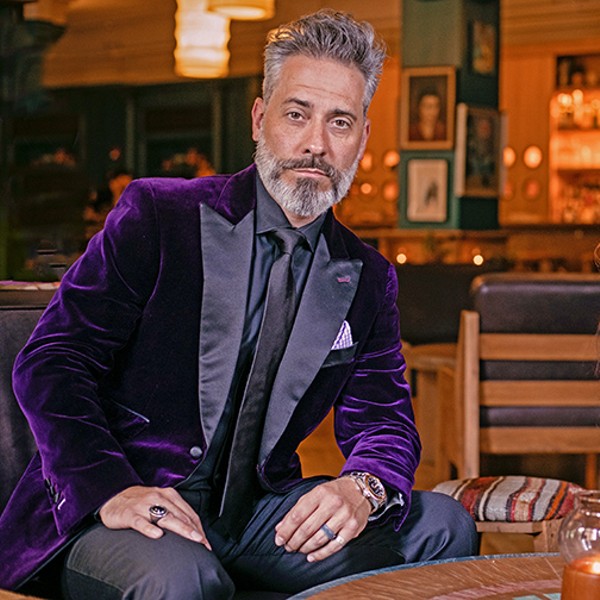 In a city crawling with beards and facial hair, it’s unlikely that most hirsute Richmonders experienced a major career shift because of what was growing on their faces.

Not so for Stephen Adkins.

Four years ago, after a stint in the Army and working for his family’s accounting firm and a contracting business, Adkins was inspired to change his look by growing out his facial hair. The distinctive coloring – his mustache and soul patch are jet black while the beard is white and his hair is similarly variegated – immediately began eliciting commentary from people suggesting he use the striking look as a jumping off point.

After spotting an open casting call in Texas for new models, he tried out and was chosen. “I hopped a plane to Austin and they did a complete photo shoot with me,” he recalls. “That opened the doors and people began seeking me out for photo shoots, to be a brand ambassador and for runway shows. It all happened organically.”

Adkins came by his fashion sense honestly. His parents were well-dressed accountants who also dressed their son stylishly as he grew up. Years spent at Benedictine High School, a Catholic military school, and in the U.S. Army instilled in him the importance of, as he puts it, “looking sharp.” Using social media to start promoting his brand, Adkins acquired 50,000 followers in six-months and offers began coming in to model.

“I walked 25 fashion runways, all the way up to New York Fashion Week,” he says. “The more runway shows I did, the more people reached out to me. Once I began doing commercials, the same thing happened and suddenly, the lid was off.”

The proof is in how many magazines will use him on their covers this year. Virginia Style Magazine will feature him in April, Eclectic Shades Magazine in May, Fashion Haunts Magazine in June and Beauty & Barber Magazine in July.

“I love the networking of modeling,” Adkins says. “Entrepreneurship is at the heart of why I’m doing this, using modeling as the platform to expand my brand.”

By 2019, his social media following numbered over 200,000. The social media director of Alton Lane, a bespoke menswear company founded by University of Virginia graduates, reached out to Adkins for a meeting. The company was looking to expand their reach and design capabilities, bringing him on as their first guest designer. Dubbed the Stephen Collection, the line included suits, ties, shoes and belts conceived of by Adkins.

“I toured the country with the line to highlight the collection,” he says. “I was the poster boy to show you don’t have to wear a navy, black or gray suit when there are other options available.” For him, the tour was a way to get his face and name out there.

A member of the board of directors for RVA Fashion Week, which runs from April 26 to May 2, Adkins also serves as model coordinator for the annual event, choosing all the models.

“I understand how runway shows work, both the back and front end,” he explains. “I use my experience to make it the best it can be. I know the look and walk we want for Fashion Week.” Although he’s only been part of the fashion world for four years, a lifetime of attention to dress and style means Adkins has definite ideas on how men should dress – and it has nothing to do with particular clothes or trends.

The latter topic ties into his newest project, his line of grooming products about to launch. Currently being manufactured in California to be sold online, the line is all natural and includes hair products such as pomade, sea salt spray, texture clay and beard balm. Shampoo and conditioner will be added to the line by the end of the year, so he’s working to make them available in local barbershops and salons. It was Adkins’ wife Lisa who came up with the name, the Fox Edge Grooming Co., a nod to the many references to her husband as a “silver fox.”

After four years of nose to the grindstone, Adkins is finally reaping the benefits of his work spent modeling, fashion designing, acting and creating grooming products.

“It’s like I’ve earned my badge and I’m finally starting to monetize myself, but you’ve got to stay encouraged enough to keep at it,” he says, adding that finding people in the industry to provide emotional support is paramount.

“You’ve got to be prepared to pay your dues, educate yourself about the industry and perfect your craft. You’ve got to be willing to do all that because you never know where contacts will lead. I pursued this because I wanted it bad.”

RVA Fashion Week will be held April 26 through May 2. You can learn more at rvafw.com.