A jaw-dropping new exhibition at the Science Museum looks to correct misconceptions about an apex predator of the seas. 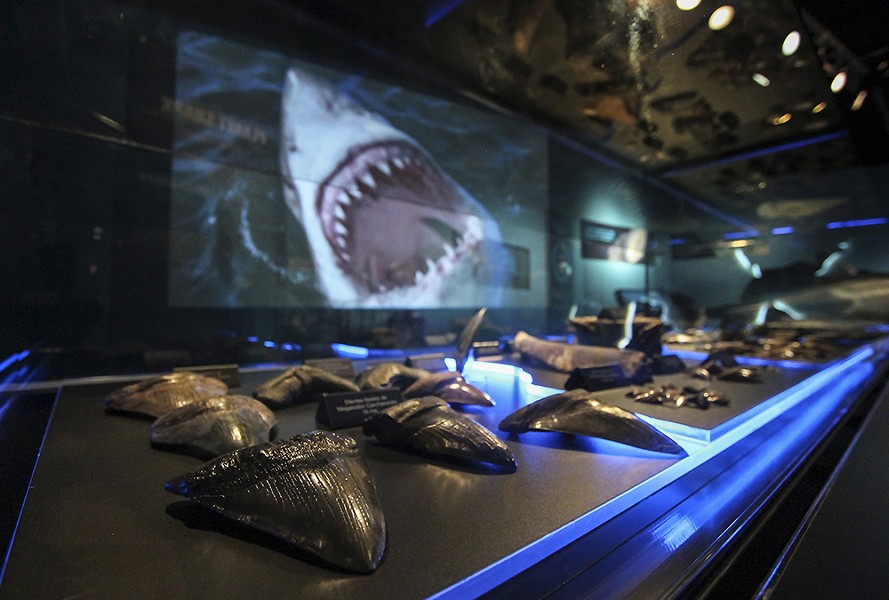 Did you know more people die annually taking selfies than are killed by sharks?

That's right. Despite plenty of bad PR for sharks in the past, a new exhibition at the Science Museum, “Planet Shark: Predator of Prey,” aims to set the record straight on one of the oldest, most powerful animals on earth.

Not only have sharks survived multiple extinction events that wiped out over 96% of all life on the planet, they’ve also left behind one of the greatest fossil trails of any animal: teeth. Visitors to this exhibit can check out a pile of 26,000 shark teeth on display, which represents the number of teeth a shark typically sheds in a lifetime. No wonder they’re so easy to find. 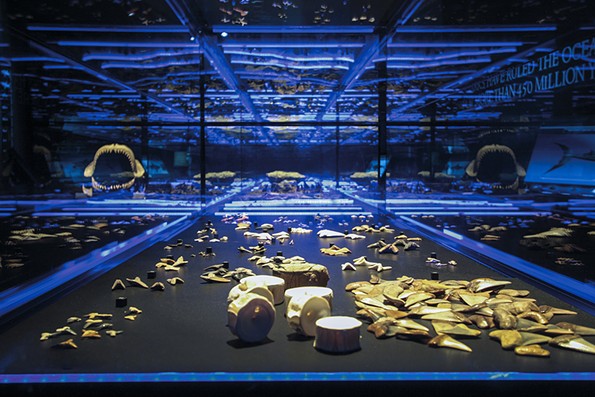 Older than dinosaurs, insects, and mammals and still going strong, sharks have survived five extinction-level events, including the Industrial Revolution. A timeline with fossilized artifacts begins with shark ancestors that survived an extinction level event 488 million years ago which wiped out 50% of all life. With such hard-won survival instincts and tough genes, it’s no surprise that sharks swim on while weaker species disappear.

Upon entering the exhibit, guests are greeted by a large, gaping shark jaw. But it’s the giant video screen nearby that may inspire instant “r-e-s-p-e-c-t” for these prehistoric-looking creatures. That's where various species of shark (spinner, shortfin mako, gulper, sandbar, and many others) are depicted life-sized on the giant screen. It’s one thing to read that a whale shark is over 60 feet long and quite another to see those dimensions a few feet from where you stand. 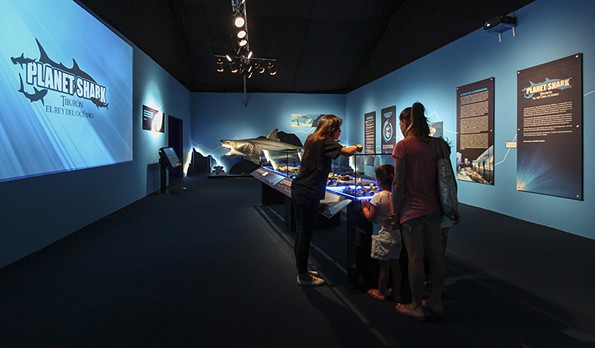 The exhibit moves between the history of the shark, its evolution, the pervasive cultural influence, and the ecological impact. A wall is dedicated to fact and fiction and features years’ worth of enlarged newspaper articles and photographs about shark attacks. A visitor can’t help but ponder what effect popular culture (the original summer blockbuster “Jaws” from 1975) and media reports have had on the public perception of these majestic, carnivorous fish. 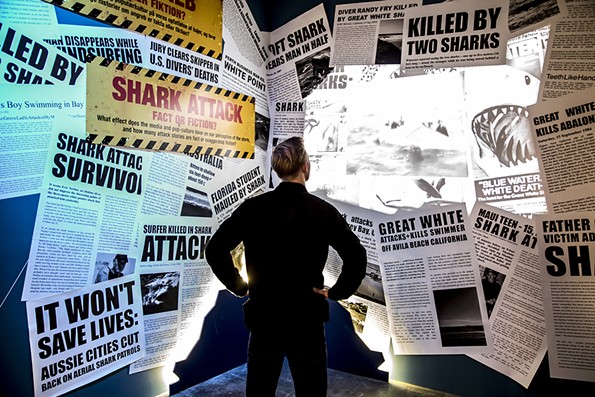 To put a finer point on the subject, a nearby video screen shows an interview with a shark attack survivor who insists that he doesn’t hold a grudge for being attacked. Rather, he was just that rare unlucky victim, given the very small odds of being attacked. However, for educational purposes, the exhibition lists ways to avoid shark attacks and advises that if attacked, you should be aggressive in doing whatever it takes to get away; attacking its most vulnerable parts, namely the gills and eyes, are your best bet.

Fascinating artifacts abound, from fossilized shark feces to a hardback copy of “Jaws,” autographed by Peter Benchley, even a surfboard with multiple shark bites taken out of it. Various jaws of all sizes from myriad species and shark models cast from real animals provide a reality check. An immersive walk-through gallery uses huge movie screens to feature 45 minutes of compelling, high-definition, underwater footage of sharks in their natural habitats. Watching many kinds of sharks ignore each other during a feeding frenzy, after they spot a school of sardines, it’s clear how everyone is welcome at the underwater, all-you-can-eat buffet.

The ecological importance of sharks is brought home with a display explaining that sharks are at the top of the food chain -an apex predator- and if they’re under threat, as sharks have been for the past couple decades, all the layers below them on the food chain are in danger, too. That means seals and large fish, small fish, krill, and plankton are at risk, a fact that could throw the entire eco-system out of balance. Up to 100 million sharks are being killed every year with as many as 73 million used for shark fin soup. A gruesome photograph shows piles of dead sharks, their fins cut off and the bloody remainder left to rot, a poignant entreaty to give up a soup that causes so much unnecessary shark death. 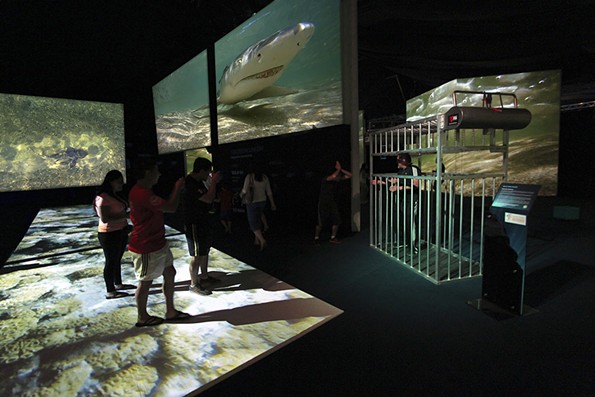 Because scientists will always want to get close to sharks to study them, the exhibit includes examples of underwater outerwear. On display is a Neptunic chainmail garment, a protective suit that represents the best shark protection currently available. Although a shark will still be able to inflict blunt force trauma such as dislocations and broke bones, the suit is somehow impenetrable to even the sharpest teeth; a nearby chainmail sleeve and glove allow visitors to experience the feel of the Neptunic suit for themselves.

Created in Australia by Grande Experiences and an international team of shark experts, marine biologists, and oceanographic cinematographers, “Planet Shark: Predator or Prey” comes down squarely on the side of sharks’ right to exist. A telling caption next to a large image of a shark and a human diver reads: “This is the most dangerous animal in the world, responsible for millions of deaths every year. By his side, we can see a great white shark swimming peacefully.”

In addition, the Science Museum of Virginia is celebrating all things shark this summer with an array of demonstrations, educational activities and an IMAX film to complement the exhibition. The museum will be showing the giant screen film, “Great White Shark,” in the Dome this summer, as well as hosting “JARS: Sharks on Loan,” a touring exhibition featuring dozens of shark specimens in jars from the Virginia Institute of Marine Science at the College of William & Mary. According to Director of Education Timshel Purdum: “I’m confident our enthusiasm for these amazing animals will not only entertain, but also change perspectives.”

Maybe a start for some means understanding that taking a selfie – or an even better example, driving a car any day of the week – is far more likely to be life-threatening than being attacked by a shark when you wade into it's home, the ocean. 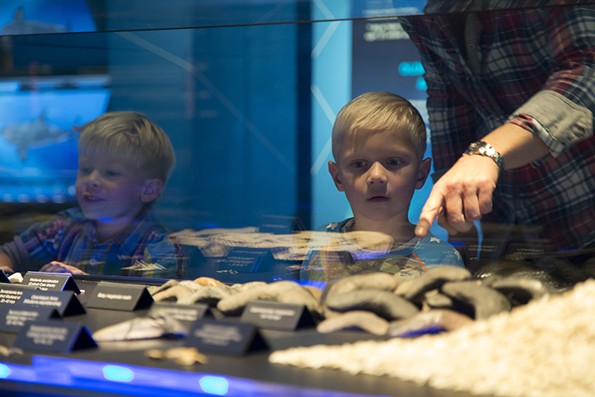