Could the mayor’s redistricting plan solve the city’s most vexing problem — the concentration of poverty? 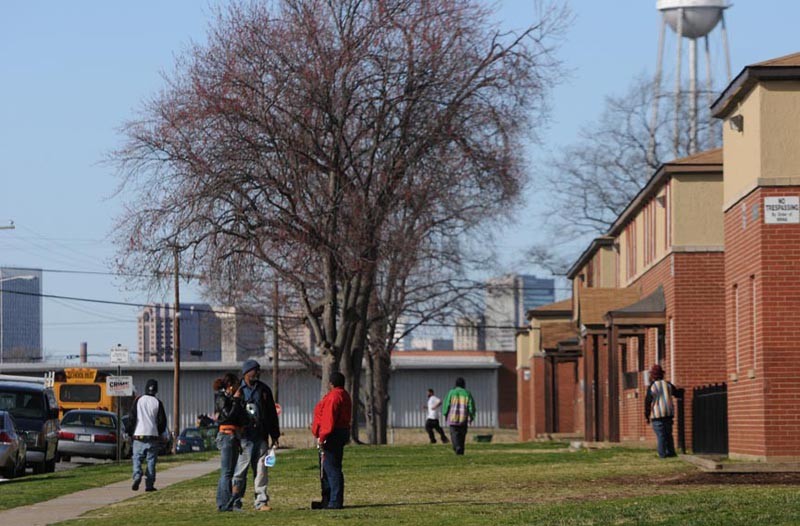 Mayor Dwight Jones’ redistricting committee has suggested doing something that no other city appears to have done: use poverty as a driving factor in redrawing voting district lines.

The idea is to disperse poverty among elected officials so more politicians have stakes in alleviating the problem, says Thad Williamson, a committee member and associate professor of leadership studies at the University of Richmond.

If members of the City Council and School Board must serve more equitable percentages of lower-income constituents, as the argument goes, those voters could get better representation and more attention. The idea isn’t without some important caveats, Williamson notes: “The big variables are going to be whether poor people are mobilized and whether poor people are organized.”

Two of the committee’s plans would modestly chip away at the concentration — plan A, for example, would move Hillside Court to the 8th District — but leave the 1st and 4th Districts as markedly more affluent than the rest. The third plan would scrap current boundaries and start over, cutting the total number of districts from nine to five. That would require General Assembly approval of changes to the city charter.

The plans have received a lukewarm reception from council members. “I don’t think the changes [the committee] was proposing would make one bit of difference as far as the outcome of how people are addressing poverty,” 1st District Councilman Bruce Tyler says.

Reva Trammell says the proposals would “destroy” her 8th District and upend her constituents, while not doing one whit to end poverty. “How do you solve that, when there aren’t jobs?” she asks. “We need jobs.”

Chris Hilbert of the 3rd District is skeptical that dispersing poor voters would have much effect. “I think that’s a good theoretical argument,” Hilbert says. “I’m not sure that that is the reality.”

He says the problem is that lower-income voters are less likely to vote. “All politicians respond to people who vote,” Hilbert says. “If you are not going to vote, politicians can’t afford to be as concerned about your opinion. That’s just as brutally honest as I can be.”

Voter registration is much lower in poorer districts — in Graziano’s 4th District, 82 percent of the voting-age population is on the rolls, while in Robertson’s 6th District only 60 percent are.

Some council members say that shifting boundaries isn’t necessary because there isn’t one member among them who isn’t concerned about the city’s poor, and they refer to examples of such concern. Tyler says he’s pointed out several times that the mayor’s budgets don’t contain enough funding for school maintenance.

“When you have children going into those school buildings that are in disrepair, that sends a very clear message,” he says. “I have a very low percentage of poverty in my district — that report bears that out — yet I find myself being the one that constantly has to bring this forward.”

While Tyler may have expressed concern for schools outside his district, what’s to say the next 1st District councilman will do the same? The point is to redraw districts to equally distribute political representation for the poorest citizens for generations to come. In theory, the plan to spread the city’s poorest residents among all nine council members would ensure that each representative had a vested interest in addressing the city’s concentrated poverty. After all, there’s a reason why Chesterfield and Henrico counties aren’t clamoring to participate in a regional school system — which could break up the high concentration of poor pupils in the city — or angling to develop substantive public housing, or pay for full-service regional buses. The concentrated poverty is in the city, not the counties.

City Council is scheduled to vote July 25 on a draft plan that will be presented to the public at several public hearings in August. The final version will be voted on Nov. 14 and sent to the U.S. Justice Department for final approval — a step required because of Richmond’s past disenfranchisement of black voters.

As the committee’s report outlines in detail, that disenfranchisement is a key factor in the poverty that plagues the city today. The nine-district system was instituted in 1977 after a lawsuit over the city’s 1970 annexation of 32,000 people in Chesterfield County, which the courts ruled diluted black political power.

Considering poverty in voting district boundaries appears to be a novel concept. Williamson asked two experts — Todd Swanstrom, a University of Missouri-St. Louis professor and authority on city politics, and J. Gerald Hebert, a lawyer who specializes in election law and redistricting (who also has consulted with City Council) — if other cities had considered poverty rates in drawing lines. Neither knew of any. A search of newspaper databases didn’t show evidence of such efforts either.

“I hope at least it’s recognized that … thinking about the poverty question is a step forward and an attempt to move beyond the narrow black-white framework that has dominated since the 1970s,” Williamson says.