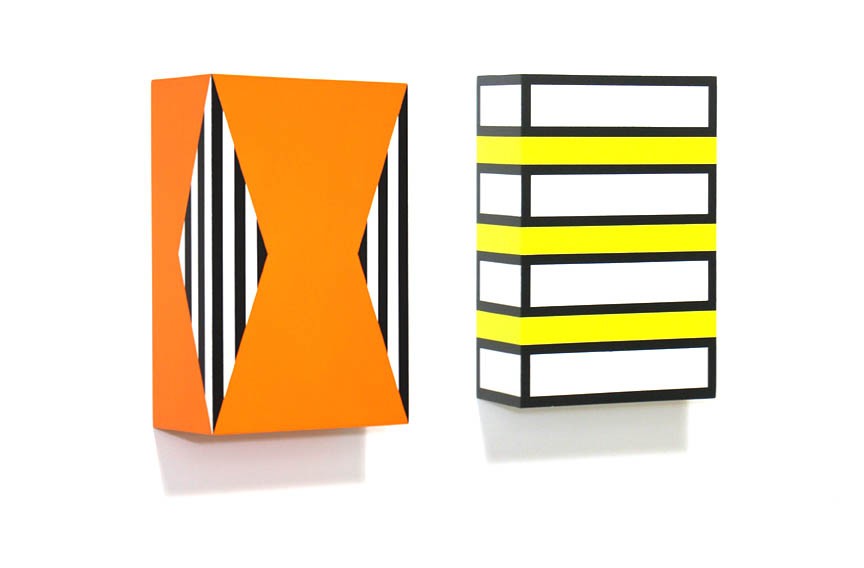 After a 10-year hiatus from abstract paintings, artist Richard Roth is back in action — and so are his creations.

“When it comes right down to it, I will do just about anything to avoid making boring abstract paintings,” says Roth, a Virginia Commonwealth University professor. “I want to be fearlessly ‘retinal!’”

An internationally recognized artist, Roth has taught at VCU since 1999 and for eight years worked as the chairman of the painting and printmaking department.

He continues his legacy of abstract painting with recent works — made of acrylic on birch plywood panels — that are a playful blend of painting and sculpture he refers to as “anti-heroic formal abstractions.”

But these paintings do more than emulate movements seen in art history. They update and challenge them. For anyone who might wonder about the importance and function of painting in a contemporary art world, Roth supplies an energetic response.

His painted objects are at first reminiscent of minimalism, a movement that sought to remove all nonessential forms from art. But they are shape shifters in their own right, combining design sensibilities with a contemporary flair. Their three-dimensionality allows them to tap into a number of relevant influences, particularly popular and consumer culture, product and package design, and architecture. He even recognizes a book on caterpillars as a source of inspiration.

This exhibition spans more than 30 years of work in two rooms, one focusing on the works made from 1970 to 1990 and the other dedicated to his most recent series. The earliest works are large enamel paintings on glass that display crisp geometry and vivid hues like those of the fashion world or store window displays. As the works progress, the paintings on wood panels begin to occupy space by including dimensional elements Roth collected from contemporary material culture. Instead of remaining simply on the wall, or as Roth writes, in “window status,” the paintings become part of installations along with wood, steel, plastic and ready-made objects.

“I moved from the larger early work to collecting and exhibiting collections via my use of actual, found objects in installation-related paintings, such as the fire extinguisher in Fire Chief,” Roth says via e-mail. “At that time I became more interested in objects in the world than in inventing my own. I didn’t alter the objects I collected and presented, I let them speak for themselves.” ‘Fire Chief’ displays an interesting conversation between the extinguisher and the striking red and black panels, simultaneously complimenting one another while maintaining separate identities.

It was during a 10-year break from painting, when he was collecting objects for conceptual pieces that Roth began designing minimalist furniture, allowing the designs to inspire artistic prototypes that sparked his return to painting. “It seemed something was compelling me to ‘make things’ again, so I got a studio and began painting,” he says — “an activity at once completely familiar, but now after over 10 years of conceptual projects, delightfully strange and exotic.”

The newest pieces are the smallest in the show. Refusing to be concretely classified, they challenge the boundary between fine art and crafted object through the play of the two- and three-dimensional. Roth applies visual tricks that confuse the front, side, and bottom faces of the panels, inviting the viewer to interact with the piece from all sides. The combination of brilliant color and quirky titles such as “Swirly Dollops,” “Double Dutch” and “Cat’s Meow” engage the imagination and sense of play. Instead of fearing the supposed limits of formalism, Roth is excited by the endless possibilities.

Richard Roth’s “Under the Influence” will be on view through Feb. 23 at Reynolds Gallery. For information call 804-355-6553 or visit reynoldsgallery.com.