Shamrock the Block in Shockoe Bottom 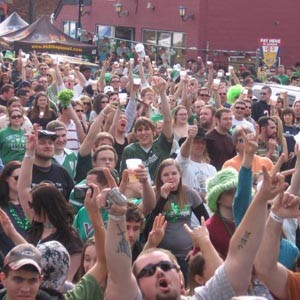 Long before the color green became so remarkably associated with the celebration of St. Patrick's Day — clothing, beverages, even rivers — the color most equated with the historical figure was the color blue, officially regarded as St. Patrick's blue. While decades of shamrock-picking, leprechaun mythology and political symbolism have co-opted one shade for another, modern-day celebrants hardly consider it worth worrying about when there's so much drinking to be done. Speaking of which, Brown Distributing presents the year's biggest St. Patrick's Day bash with its annual Shamrock the Block. Taking place in Shockoe Bottom Saturday, March 12 from noon-6 p.m., the free event includes live music, food and crafts. Information at shamrocktheblock.com or by calling 304-6870.  — Mike Hilleary

Note: This entry has been corrected from the print edition. The event is sponsored by Brown Distributing and not Venture Richmond.