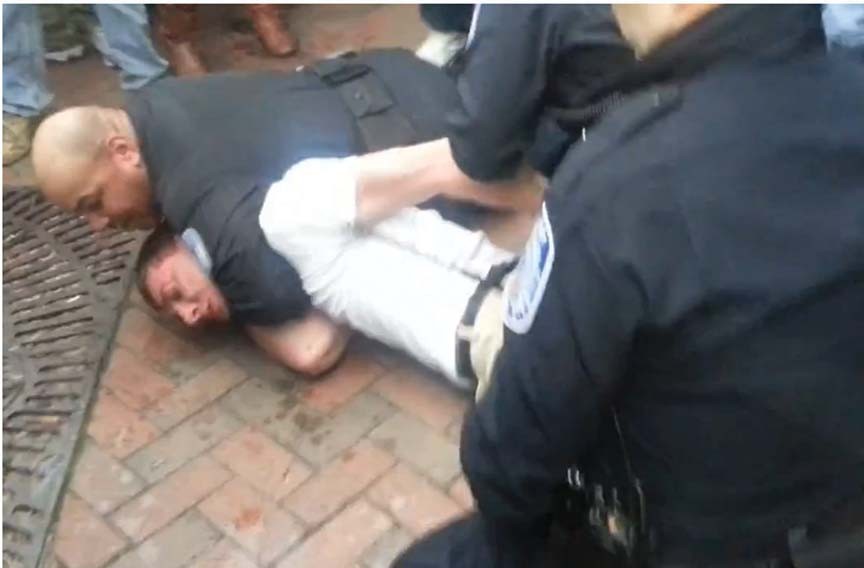 He's YouTube famous. And as of Friday, Jason M. Dotson of Colonial Heights also has been charged with felony assault on a police officer for his part in a St. Patrick's Day brawl captured on video and watched 170,000 times.

As for how officers handled the incident, Richmond police spokesman Gene Lepley confirms that the department won't be releasing the results of an internal affairs investigation.

Video of the fight at the Shamrock the Block Festival on March 16 appears to show a police officer repeatedly push and choke the 22-year-old. They end up wrestling on the ground before two other officers step in. The department didn't identify any of the officers.

"It's a personnel matter," Lepley says. "We just don't speak to it." Likewise, the results of any internal investigation are exempt from public disclosure as private personnel records under Virginia's Freedom of Information Act.

Sparking debate and dividing residents, the video of the fight simultaneously provoked cries of police brutality and praise that the officer showed great restraint.

In emails to Style Weekly, some people who think the officer overreacted wondered whether the department would conduct a fair investigation. They noted the department's actions on social media the day the video went viral.

Communications staff used the Richmond Police Department's Facebook page to "like" supportive comments posted by residents. Garnering official Richmond police approval were missives such as: "I watched both videos and I support the RPD! Good Work!!" The department ignored less sympathetic opinions.

Lepley says communications staff has no interaction with the internal affairs unit, so actions on Facebook aren't indicative of how the department is handling the investigation.

Lauri Stevens, a law enforcement communications consultant based in Boston, says the Richmond Police Department has an extremely active Facebook presence and is known as a leader in police use of social media. But, she says, "we are all still learning."

Stevens says the general perception is that it's the department as a whole making comments when the reality is that it's one person making a judgment call.

"I would have advised them to make a statement on their Facebook page … thanking everyone for their input but [saying] they're not allowed to comment further," Stevens says. "That would have satisfied their desire to not ignore their followers but also not jeopardize any relationships or the case."