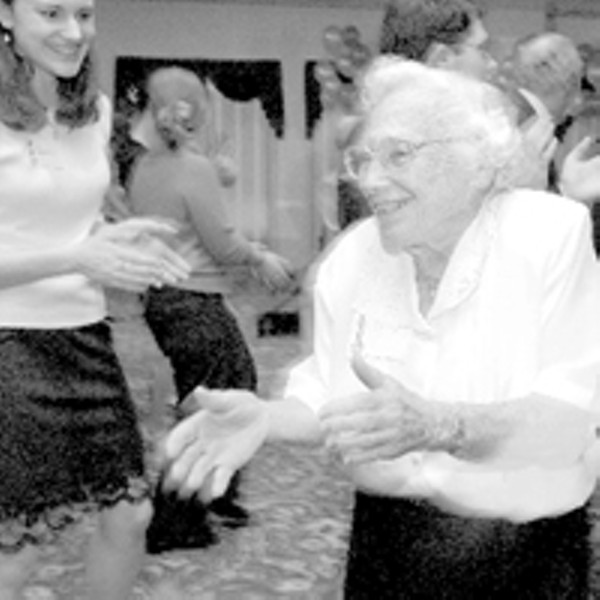 “Rest? What’s rest?” Zerkin replies, and she alights from her seat, insisting she has energy to spare. Rhythm, too. “I just love to dance!” she exclaims, beaming. “I’ve been dancing on my toes since I was a little girl.”

George and Zerkin are in their mid-80s. As one takes a breather in her green wool cape and houndstooth skirt, the other proves that her black, suede 3-inch pumps are as providential as glass or ruby slippers. Out on the paisley carpet, Zerkin’s shoulders rise and fall to the beat of “Mack the Knife.” The seniors have been told by their youthful hosts that tonight, they’re in Hollywood. And looking about the room, the theme has stuck. They are the stars.

On this rainy, windy Wednesday evening, Nov. 12, the University of Richmond is abuzz with 120 seniors from more than 10 local retirement homes. They’ve gathered inside the balloon-bedecked student commons to promenade and socialize like old friends at a class reunion. They’ve come wearing shiny suits and sequined sweaters, sling-back sandals and sensible shoes. They’ve come to cut a rug.

Some guests at the 11th annual Senior Citizen’s Prom have walkers; some have requests. The “Electric Slide,” for instance, and anything Sinatra — songs that make you move. Quickly it becomes clear that, for many, the 95 college students who escort the old are more than dates. They are images of their youth — upright, sure and strong — images of themselves, still.

“Enjoy the food, the music and the company. But most of all have fun,” says Karen Scheuer, a member of Alpha Phi Omega, the university’s coed service fraternity. Scheuer, a sophomore, and junior Anne Schwalbe are co-chairwomen for the event that APO hosts annually. Planning for the dance began in August. By all accounts, it appears to have paid off. This year’s turnout is better than last, they say.

A seven-piece faculty jazz band warms up for a student a cappella group that performs three songs. Politely, the seniors sit and listen, and applaud when the singers finish. The DJ welcomes the group and invites them to dance. In minutes the carpet is flooded with people ages 18 to well past 80.

“College students get a bum rap,” says Leonard Goldberg, UR’s vice president for student affairs. Goldberg volunteers at Beth Shalom, one of the senior retirement homes represented tonight. He smiles like a proud father. “This event just captured our students,” he says. “They love it. Some of them really get into it. And the seniors — they’ll remember this for months.”

A couple holding hands approaches the DJ during “Unforgettable.” They are Pat and Ginny Talley. They look too young to be the seniors that they are. They both wear black pants and dark tops. They are nearly the same height and size. “Do you by any chance have any Van Morrison?” the man requests. The DJ nods a yes. The man cups his hand to the side of his mouth as if keeping his partner in suspense. “Moondance,” he utters.

Meanwhile, Zerkin, from the other side of the room, makes an observation. “My friend and I were noticing, there’s no real dance floor here,” not like the pine kind she grew up with. “Carpet can hold you up,” she says, waving her red-painted fingernails in the direction of those dancing. “You can do turns when you’re on wood.” Sophomore Coopersmith smiles and tells Zerkin maybe that’s something the organizers will consider for next year’s dance — importing a real floor.

After the “Electric Slide,” the DJ plays some Van Morrison. The couple that had requested it glides across the carpet like ice dancers. They’re in sync from head to toe, dancing their swing dance that, by now, must be familiar. They look confident, their faces holding a kind of half smile that comes when people close their eyes to something pleasing. They don’t seem to hear the chatter of students and seniors that has swelled since most of them first met hours ago. It nearly drowns out the music.

Out on the carpet, George is dancing again with her handsome freshman partner. It’s the slow song “I Hope You Dance” by Lee Ann Rimes. All about her, couples dance. Zerkin, too, with her new sophomore friend. There are no wallflowers. Some couples are naturals, as if they’ve lived their lives attending cotillions. Others look as mismatched as odd socks. But in a place where two worlds meet — if only briefly, if only to dance — time is the only thing standing still. S