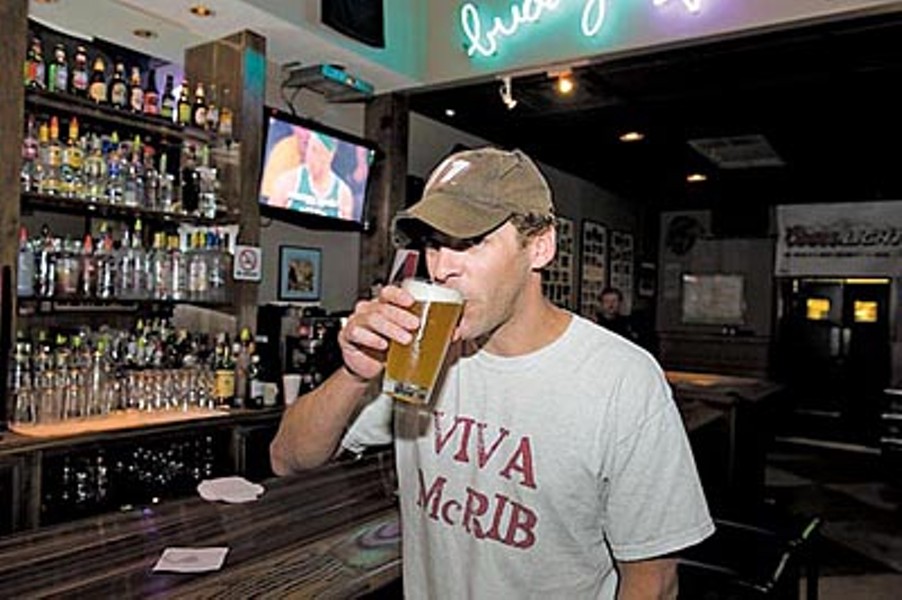 Scott Elmquist / File Buddy’s regular Kirk Hunter sips on a Blue Moon in Style’s 2010 Bar Guide. “I always come here,” he says, when asked what brings him to Buddy’s. “Because all my friends are here, and everyone knows me here.”

Buddy's will be hanging around for at least three more years at the corner of Stuart Avenue and Robinson Street, after lease negotiations today led to consensus among the owners of the building and the business.

In a statement posted on the "Save Buddy's" Facebook page tonight, Lions Paw Development and Buddy's announced: "Both parties realize that misunderstandings along the way led to a breakdown in communication and are glad that these misunderstandings have been addressed for the good of all involved. Upon the signing of a lease tonight, both parties shook hands and wished one another well."

"Charlie and I have done business together for 25 years, and although we have not always seen eye to eye, we have always respected one another and that respect led to this meeting of the minds tonight," said Mike Dealto, Buddy's co-owner, in the statement.

“Lions Paw Development is dedicated to progress and we also believe that a successful negotiation is only achieved when both parties listen. I am glad that we were able to come to terms and wish nothing but the best for Mike Dealto, Buddy’s and his employees," Diradour said.

The developer, who was traveling during the holiday weekend and unavailable for comment, had explained in an email to longtime Buddy's bartender Lee Martin that he had "decided that now is the time for a fresh face to create a fresh place." But the situation changed dramatically during the past week, after the Facebook page was created and Style Weekly broke the news that the impending lease wouldn't be renewed come December. A flurry of response from bar supporters has drawn nearly 3,000 members to the page since Saturday.

Since Style broke the news about Buddy's on Saturday, the "Save Buddy's" Facebook page has grown tenfold during the last 48 hours to about 2,500 members. Diradour, the building's owner, hadn't yet responded to requests for comment, but in an email to Buddy's first bartender, Lee Martin, who inquired about the situation, Diradour wrote, "I have decided that now is the time for a fresh face to create a fresh place."

Buddy’s, the Fan restaurant known for its outdoor patio, neighborhood feel and down-to-earth regulars, must find a new location after 30 years on the corner of Robinson Street and Stuart Avenue.

The restaurant’s lease is up at the end of the year and isn’t being renewed, manager Angie Dudley confirms.

The news came as a shock to loyal Buddy’s regulars, some of whom took out their frustrations about the situation — and the landlord — on a “Save Buddy’s” Facebook page, set up today. Within a few hours about 250 people had joined the page.

Owners Mike Dealto and Greg Nevi weren’t immediately available for comment, but Dudley says the news all came to a head this week. “They’re just trying to deal with the sadness of it right now,” Dudley says. “I do know that they hope to move to a new location.”

In a roundtable discussion with a cross-section of local bartenders for the 2010 Bar Guide, Style columnist Jack Lauterback posed the question: “If a visitor asks you for the one bar that’s quintessentially Richmond, where do you send them?”

“You gotta send them to Buddy’s,” bartender Otto Bartsch replied — “because it’s Buddy’s.”