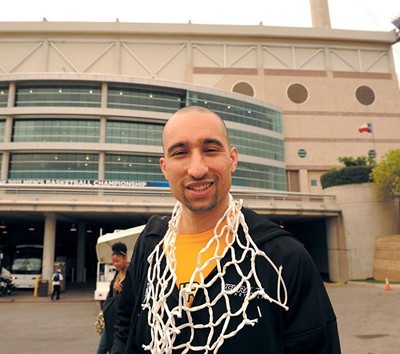 UPDATE: The Chicago Sun-Times is reporting that Shaka Smart has turned down the Illinois coaching job.

OK, so I wasn't always sold on Shaka Smart. My oldest son, Jordan, has attended Smart’s basketball camps -- all three of them. He was supposed to attend the Anthony Grant VCU basketball camp in 2009, but Grant departed for Alabama after I signed him up. We thought about pulling out but decided the head coach couldn’t possibly make that much difference, especially to an 11-year-old.

I remember meeting Coach Smart on that first day of camp, when I dropped my son off at the Siegel Center. As I stood on the steps Smart seemed particularly short, and as I approached he shook my hand. I can’t remember exactly what he said -- something generic, like, “He’s going to learn a lot” -- and I walked away thinking that I really missed Anthony Grant.

Three years later, it seems like the entire city is holding its breath at the prospect of losing Smart. Five years ago, the newly hired Grant almost left VCU to replace Billy Donovan, the head coach at Florida, who had all-but agreed to coach the NBA’s Orlando Magic. He came back to VCU when Donovan turned down the Magic job. VCU, and Richmond, rejoiced at dodging the bullet. Two years later, Grant left to coach Alabama.

Losing Smart, however, would be devastating. If Smart leaves to take the head coaching job at the University of Illinois -- reportedly, the athletic director is a former associate of Smart’s and is pushing very aggressively to hire him, at possibly $2.5 million a year -- Virginia Commonwealth University just might break down, fall to the floor and curl up in the fetal position. It will, psychologically, take the wind out of this city. Smart took VCU to the Final Four a year ago, but there’s more to it than that: Smart embodies a certain spirit, a certain swagger that aligns perfectly with Richmond. Smart is who we think we are, in some respects. That’s a powerful thing. Shaka was the 2011 Richmonder of the Year. Shaka made our Power List last summer. Everyone knew that the big schools would come calling and Coach Smart would be the hot commodity -- especially if the Rams are winning -- and after this weekend’s two-point loss to Indiana the speculation started immediately. So it’s a bit of a catch-22. Success will ultimately tempt Smart, who’s only 34, to leave Richmond.

I’ve heard rumblings that Coach Smart is frustrated that he’s going to have to win the Colonial Athletic Association tournament every year to get into the NCAA tournament. Case in point: Even though the Rams finished the regular season with 25 wins and six losses, an incredible year by any standard, the conventional wisdom held that VCU had to win the CAA to get in. Drexel, which was riding a 19-game winning streak before losing to the Rams in the championship game, is playing in the NIT.

There have been reports that the Atlantic 10 conference is interested in adding VCU and George Mason University. If this is true, it could sweeten the pot for Smart. Playing in the A-10, also home to the University of Richmond, would guarantee VCU gets better competition throughout the regular season, and many more chances to win games that get the attention of the NCAA selection committee.

Will Smart stay or go?

Stuart Siegel, a major donor and supporter of VCU basketball, expects the answer to come sooner rather than later. “This is not something that is going to linger on,” Siegel says. “I have a huge amount of respect for Shaka not only as a coach, but as a man who has a lot of loyalty to the players and the university.”

What happens if he leaves? Siegel hates to speculate, but says it’s something that simply comes with the territory. “Losing Shaka wouldn’t be a good thing. But the fact that you have great success and everyone wants your coach is a good thing,” Siegel says, adding that if Smart departs VCU will recover just fine: “Life will go on.”