Shaka and the Shockers

VCU beats Wichita State in a nail-biter. So what’s next for Coach Smart? 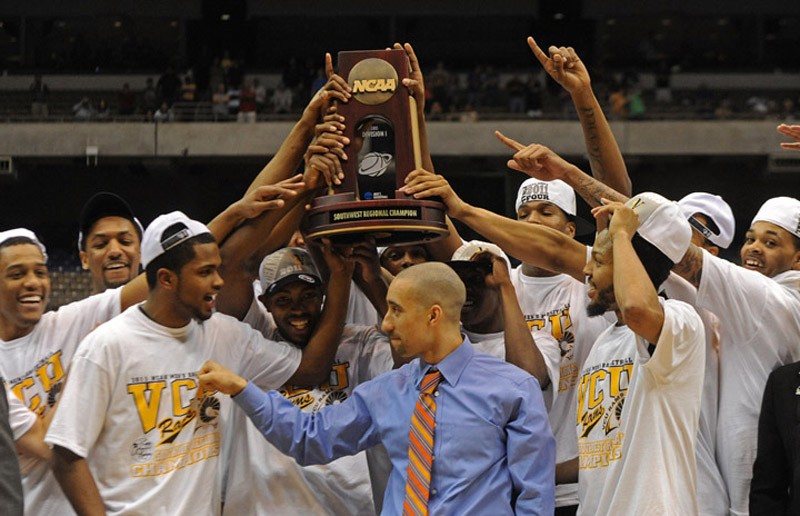 Now the watch party begins -- again. Gliding into the NCAA tournament after the Final Four run, Coach Shaka Smart said all the right things, at all the right times, and his havoc-wreaking Rams caught another team -- Wichita State -- off guard in a 62-59 win en route to the round of 32.

The Rams likely don’t have the offensive prowess to advance much further, but for Smart it didn’t really matter. After turning away N.C. State and Missouri a year ago, he came back to VCU for an eight-year contract that pays him approximately $1.2 million a year. But getting back to the tournament -- with only one returning senior, a better overall record, a Colonial Athletic Association championship and a team that’s even more impressive on defense -- Smart is now an even hotter commodity.

Even more money will be tossed at Smart. The University of Illinois, in the Big Ten, is reportedly interested in Smart and can pay big bucks to lure VCU’s golden boy. At least one report has Shaka leaning toward taking the job, but of course that’s just speculation.

For at least another two days, Richmond can enjoy this win over the Shockers. During critical moments in the first half, the Rams were held together by the team’s only senior, Bradford Burgess. He struggled at times this year, but he brought some of that 2011 swagger with him to Portland, Ore. Burgess knocked down open jumpers, crossed up the Shockers and drove to the hoop, blocked shots, and pressured Wichita State’s guards into turnovers in the first half. In the second, his 3-pointer with a minute and a half remaining, giving the Rams a one-point lead, was his most important shot of the season (taking nothing away from Darius Theus’ floater, a la Eric Maynor, giving the Rams a three-point lead with 18 seconds remaining).

One of the bigger questions about this year’s team was toughness. Losing so many seniors from last year meant the team was left with a bunch of “nice guys,” Smart said last week. Under duress, and after being uncharacteristically pressed into mistakes late in the second half against the Shockers, the Rams showed they’re no shrinking violets. They made big shots when the game mattered, played tenacious defense when it mattered, and Big Shot Brad came through when it mattered.

“We just battled. And we ended up winning,” Burgess summed up after the game.

The Rams are young. Regardless of what happens from here on out, the team will be stronger next year. In the second half against the Shockers, sophomore Juvonte Reddic calmed the Rams with a critical block, and then low-post hook shot, to restore confidence. Ditto for Troy Daniels, who knocked down some big shots when it mattered most. Darius Theus has emerged as a floor leader in the second half of the season, and freshmen Briante Weber and Treveon Graham are primed to become elite players for VCU in the years to come.

But will Smart stick around? He reiterated to Sports Illustrated’s Dan Patrick in an interview last week that he’s not interested in running “away from happiness.” He said he’s not driven by financial motivations, and that he wouldn’t leave VCU for fear that the opportunities wouldn’t be there in the future. Like, say, after a couple of trips to the NIT. “I’m locked into our team,” Smart told Patrick.

For VCU, and for Richmond, let’s hope so.