VCU professor uses silhouettes to bring people together in a new exhibition at the Anderson Gallery. 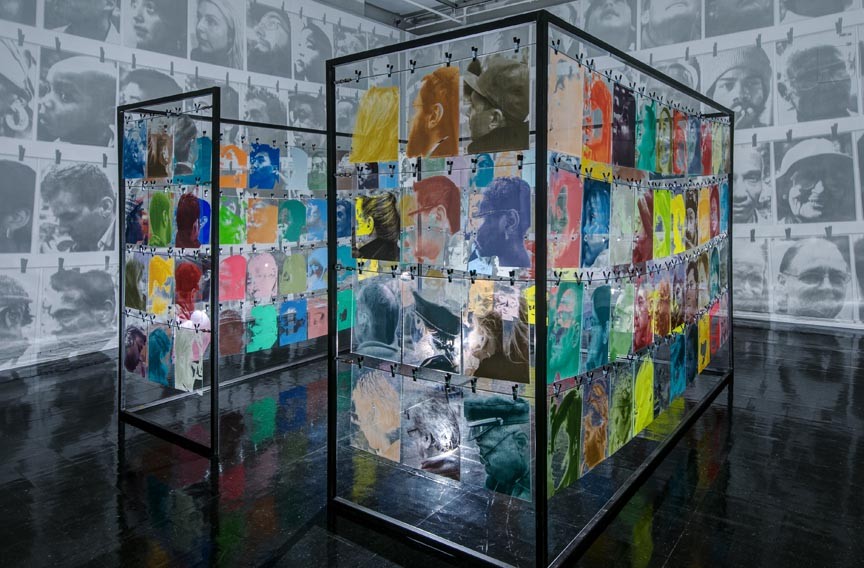 Bohyun Yoon entered a children's library in a low-income neighborhood while exploring Providence, R.I., and was struck by the array of ethnicities and cultures. With genuine aplomb, he says, "I was interested about this 'race.'"

Then a graduate student at the Rhode Island School of Design, Yoon photographed the students, silkscreened their portraits onto plate glass, and hung his installation at that library. Though the printed ink presented the range of ethnic colors, the shadow created by the plates was identical.

This idea was implemented large-scale with "Neighbors," exhibited first at the Fleisher Art Memorial in Philadelphia, and now at Virginia Commonwealth University's Anderson Gallery through Dec. 8.

Yoon was teaching at Temple University when he began approaching neighbors — residents of his block, students on campus, people in the park — to ask if he could take their portraits. These were monochromatically silkscreened onto glass in diverse colors — and not those that people read heritage into — but lavender, taupe, turquoise, crimson and forest green. Then he developed a metal structure to house a light source, display the portraits, and stand for any "institutional" room where people are categorically parsed, thus completing the conceptual arc.

As assistant professor in glass at VCU, Yoon says the light — from an Ikea bulb — is a metaphor for "opening our vision ... opening our minds." The plates are arrayed like X-rays displaying "conditions," and arranged rank-and-file, symbolizing bureaucratic consideration of people's ethnographic data. The crowd montage creates a chaos of difference based on sex, race, background, wealth and age. But the gaze of the neighbors is directionally continuous, and the shadow projected on the wall is a connected effort toward the door of the structure, its single opening. Structures can document and even celebrate social diversity, Yoon says, but "in the shadow it's all unified — behind, we're all the same human being."

Although Yoon's training — at Tama Art University in Tokyo — prepared him to use intricate technique and fashion beautiful products, he didn't want to make glass sculptures for display on pedestals, behind glass themselves. He was drawn to the explorative, experimental, concept-driven contemporary art world. The Rhode Island school rejuvenated the innate properties of glass ("fragile, clear, transparent") for Yoon, who is interested in revealing, exposing and resolving.

Yoon's artistic concerns are evident in "Neighbors" with his "transparent camouflage," and in several sculptural works created by refraction, projection and segmentation from mirrors or shadow. 2013's "Microorganism," displayed in Seoul, Korea, refracts light and produces a sonic resonance from a paper-thin convex membrane of glass.

Yoon says he's pleased to be at the Anderson, not least because the room is "just the right size" for the shadow wrap-around effect. He's teaching full-time at VCU, including a foundations class of first-semester students that he's focused on the pro-social and empowering capabilities of art, screening documentaries such as "Waste Land," in which a fine artist transforms the future of garbage-dump workers by constructing their portraits out of trash, selling the work at prestigious auctions and giving them the proceeds. "Art can be just furniture in your house, you know, to make a nice atmosphere," Yoon says. "[But] it can also change people's lives."

He hopes that his gallery can inspire his students. "My work is not salable, using light and shadow, something that people cannot purchase," he says. "It's a phenomenon — how can you buy shadow?" S

Bohyun Yoon will give a gallery talk on Wednesday, Oct. 30, at 5:30 p.m., which is free. The 2013 fall exhibitions at the Anderson Gallery run through Dec. 8. Information on the gallery at 828-1522 and arts.vcu.edu/andersongallery. Information on the artist at bohyunyoon.com.